Eleven years ago in the year 2011, Team India got a historic victory over Sri Lanka as they won the ODI World Cup for the second time. 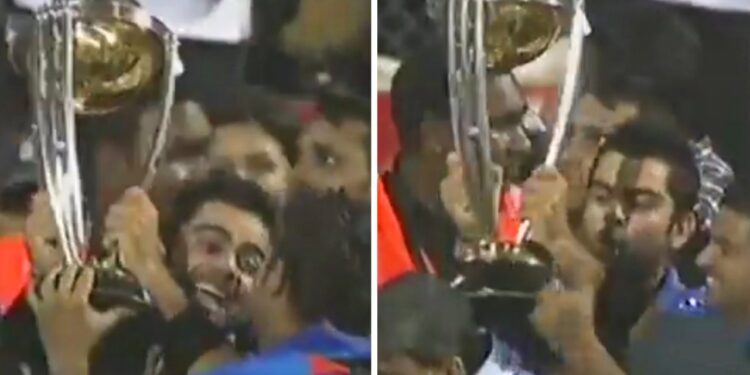 Eleven years ago in the year 2011, Team India got a historic victory over Sri Lanka as they won the ODI World Cup for the second time.

There was a huge celebration after India’s historic victory and one of the video clip of the team’s celebration has gone viral.

The 11-year-old video which is going viral on social media platforms these days shows young Virat Kohli and Suresh celebrating the World Cup victory as they have the World Cup trophy in their hands. Kohli and Raina were part of the victory lap and a man is seen walking just close to them. Suresh Raina and Virat Kohli are seen deliberately hitting a man on his head with the trophy.

As the trophy hit the old man, both the young Indian players were seen laughing at the incident. Cricket fans are shocked by the incident. While some took it in a light manner, most of the fans criticized Suresh Raina and Virat Kohli for their harsh act. Fans lashed out at them for doing unruly behavior on the field.

Caught on camera. Kohli and Raina deliberately hitting a guy on his head with the 2011 World Cup trophy 😂😂😂pic.twitter.com/51Dg8Elg5j

The victory against Sri Lanka in the 2011 World Cup final ended a 28-year-long wait for the Indian cricket team and fans to enjoy the moment of being the World Champions. India won their first-ever World Cup trophy in 1983 under the leadership of Kapil Dev but couldn’t repeat the same performance till 2011.

Under the leadership of MS Dhoni, India grabbed a huge victory in Mumbai at the Wankhede Stadium. This was also Sachin Tendulkar’s sixth and last appearance in World Cup. The young Indian players lifted Sachin Tendulkar on their shoulders during the victory lap as he was the biggest source of motivation for the team.

Every individual had great respect for the God of Cricket and when asked each one of them said that they want to win the World Cup trophy for the great Sachin Tendulkar. Eleven years since the 2011 victory in Mumbai the Indian team is still waiting to win another World Cup.