7 Series, 7 Captains: Who is the leading contender to be Rohit Sharma’s successor?

Following him, the side has been led by Rohit Sharma, KL Rahul, Rishabh Pant, Hardik Pandya, Jasprit Bumrah, and now Shikhar Dhawan across formats. 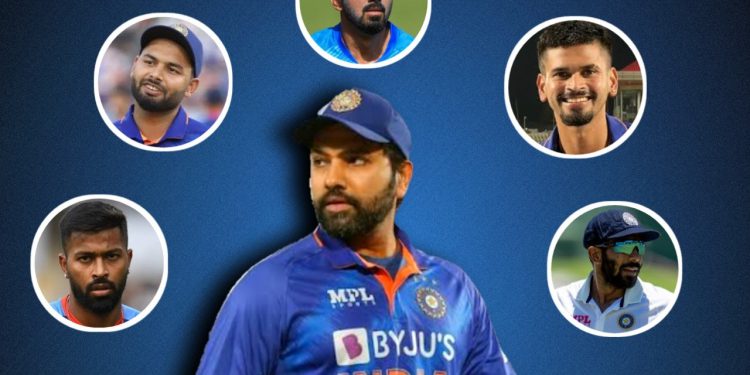 Since the handing over of the captaincy baton from Virat Kohli to Rohit Sharma, We have seen a number of layers arising as a leading figure to take on the responsibility of charging from the front.

In recent years, India has had almost as many as seven captains, with the changes signalled by the end of Virat Kohli’s captaincy tenure. Following him, the side has been led by Rohit Sharma, KL Rahul, Rishabh Pant, Hardik Pandya, Jasprit Bumrah, and now Shikhar Dhawan across formats.

Hardik Pandya is top contender to be next India Captain

Recently, the Indian Premier League saw a good number of batting and bowling performances where a good number of players came from the under-veil of India. Similarly, along the way, Hardik Pandya came in with his team, Gujarat Titans wherein he captained his side to the title.

Veteran Pakistan pace bowler Shoaib Akhtar believes Hardik Pandya is one of the major contenders to succeed Rohit Sharma as captain when the veteran steps down. Hardik has proven to be an effective leader in the Indian Premier League (IPL) 2022. With a coming of new-age captains, Rishabh Pant who led Delhi Capitals in the Indian Premier League has also shown the capabilities of a captain and Jasprit Bumrah, the fast-paced sensation who was seen leading while playing the rescheduled test match against England on 1st July to 5th July. Unfortunately, India couldn’t bring home the test series.

In a recent Times of India interview with Sourav Ganguly, he was asked about having 7 Captains with the unfortunate circumstances, he replied, “I fully agree that it is not ideal to have seven different captains in such a short span of time but it has happened because of unavoidable situation. Like Rohit was all set to lead in South Africa in white-ball but before the tour, got injured. So we had KL (Rahul) leading in ODIs and then for this recent SA home series, KL got injured one day before the series would start.

In England, Rohit was playing the warm-up game when he had COVID-19. No one is at fault for these situations. The calendar is such that we have had to give players breaks and then there have been injuries and we need to factor in workload management also. You got to feel for head coach Rahul (Dravid) as in every series, due to unavoidable circumstances, we have had new captains.”

ALSO READ: ‘If Ashwin can be dropped, why not Kohli?’ – Kapil Dev makes a big statement on former India skipper

The Indian side if possibly going to witness another captain for the upcoming ODI series with England as reports claim to have Shikhar Dhawan as the series captain.