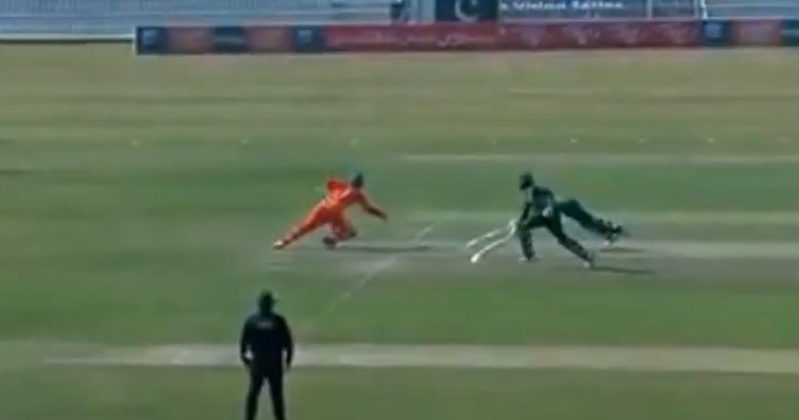 Pakistan and Zimbabwe resumed international cricket amidst the global pandemic with a three-match series been played in Pakistan. The host saw the thrilling contest through with a 26-runs win but not before a comic mix-up between batsmen Imam-ul-Haq and Harris Sohail which left them both stranded at the same leading to the former’s dismissal in comical fashion.

Imam-ul-Haq And Harris Sohail Run To Same End
It so happened during the course of the Pakistan innings, it was the 26th over been bowled by Sikander Raza, opener Imam-ul-Haq nudge the ball towards point and called for a single. Non-striker Harris Sohail immediately responded to his partner’s call and took off. However, Imam changed his mind and decided to turn down the single, but it was too later for Sohail to respond.

In the melee that followed, both batsmen headed to the same end leading to a comedy of errors. The throw from the point fielder came at the keeper’s end, which wicketkeeper Brendan Taylor failed to collect. The square leg fielder who was backing up the throw, returned it to the bowler who whipped off the bails, running out Haq.

Twitter Goes Crazy With Comical Runout
A video of the miscommunication between the two Pakistan batsmen that led to the comical runout went viral on social media, leaving fans crazy over the dismissal. In light-hearted responses, fans criticized the two batsman for their error that brought an end to a promising partnership.

Pakistan Go One Up in Three Match Series
Pakistan won the first of three ODIs by 26 runs, thereby taking a 1-0 in the series. The architect of Pakistan’s  win were useful contributions with the bat by opener Imam-ul-Haq (58), Harris Sohail (71) and a late cameo by Imad Wasim (34); Shahin Afridi led the bowling with a 5-wicket haul from his spell. For Zimbabwe, Brendan Taylor’s fighting century wasn’t enough to take them over the line.

Brendan Taylor’s Fighting 112 Falls Short
In a topsy-turvy run chase, the Zimbabwe innings lost their way despite a fighting 112 from Brendan Taylor. His 5th wicket partnership of 119 runs with Wesley Madhevere (55) kept them alive in the game until the latters dismissal saw the innings lose steam and eventually the match.

Pakistan will look to wrap up the series in the second game on Sunday, while Taylor resilience will push Zimbabwe to bounce back and square things up.