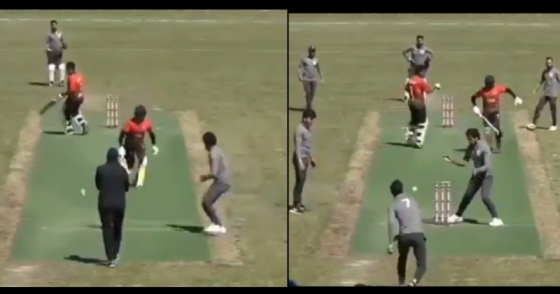 We all know cricket is a gentleman’s game, but we are also aware that it can sometimes get really whimsical. We have seen a lot of incidents on the field that have entertained us thoroughly and tickled our funny bones. One such incident took place in the Dream11 European Cricket Series Match 17, where the fielding team just didn’t seem to run a batsman out.

As cricket is resuming across the world, Dream 11 European Cricket Series is going strong and match 17 was played between SSK and VAC on 9th July in Karsby Cricket Center, Stockholm. It was a pretty straightforward match where SSK pretty much dominated VAC which fell 11 runs short of victory by the end of 10 overs.

SSK got a solid start as the opening partnership of S. Balasubramanian and B. Mahesh accumulated 61 runs for the first wicket. B. Mahesh (SSK) ultimately proved to be the highest run getter in the match with 44 runs. N. Sanagul (SSK) was the pick of the bowler, having two wickets in his kitty with an economy rate of 8.5.

A Comedy of Errors

However, it was not the batting or bowling that impressed the viewers, but a funny goof-up that caught everyone’s eye. In the last over of the first innings when SSK were batting, B. Mahesh was on strike and he hit the ball up in the air. The wicket-keeper ran to catch the ball as the batsmen on the crease proceeded to run. The keeper failed to get hold of the ball and threw the ball at the wickets in search of a run out, which he missed.

We, as audience have witnessed such comical incidents in the past as well and this one just adds to that list of goof-ups. SSK definitely got a bonus of few runs as a result of the fielding blunder. The VAC are definitely going to have a long day at fielding practice.