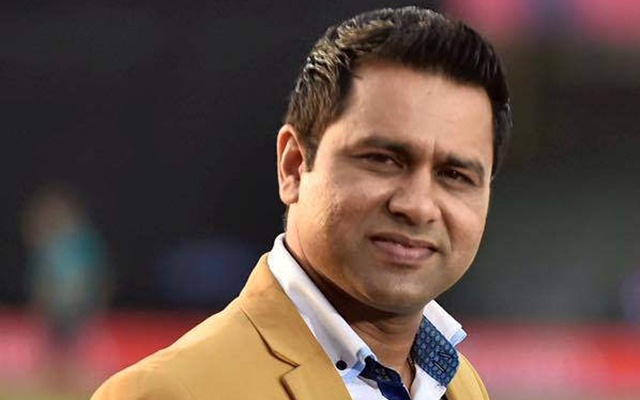 Aakash Chopra is a known name in the cricket circuit. The former Indian opener is known for his commentary and match analysis. Chopra has come out in support of young Yashasvi Jaiswal who was trolled online for his slow knock against Delhi Capitals. Jaiswal is facing the heat as he comes to IPL with a lot of reputation.

Yashasvi Jaiswal was part of the 2020 U19 World Cup team and was adjudged Player of the Tournament with 400 runs under his belt at a whopping average of 133. The youngster had hit four fifties and a century in the process. Clearly, hopes were high from the youngster but so far, he has not been able to live up to his reputation.

His scores in the IPL have been far from good. He scored only 6 runs in the first match he featured in, before being dropped. In the match against Mumbai Indians, his performance got even worse as he was out for a duck. He was given another chance to open against Delhi Capitals on Friday, but it seemed the youngster was under a lot of pressure as took 36 balls to score only 34.

Aakash Chopra lashed out at the troll

The knock by Jaiswal was definitely not up-to the mark and it gave the trolls an opportunity to take shots at the batsman. One of the trolls made a very distasteful remark on Jaiswal’s performance, which was noticed by Aakash Chopra and he wasted no time in supporting the young batsman.

A Twitter handle named ‘tuk tuk academy’ posted a morphed picture of Dhoni and Jadhav welcoming Jaiswal in the academy for his knock against Delhi Capitals. It is worth noting that Dhoni and Jadhav have not been playing their best cricket in the recent past and their strike rates have gone pretty down. Both players have also been targeted by trolls on numerous occasions.

Aakash Chopra supported Jaiswal as he wrote, “Have a heart. That’s all I’ll tell you. Leave the kid alone, please. I am sure that senior players can take a joke but it’s unfair to expect same maturity for a 19yo.” 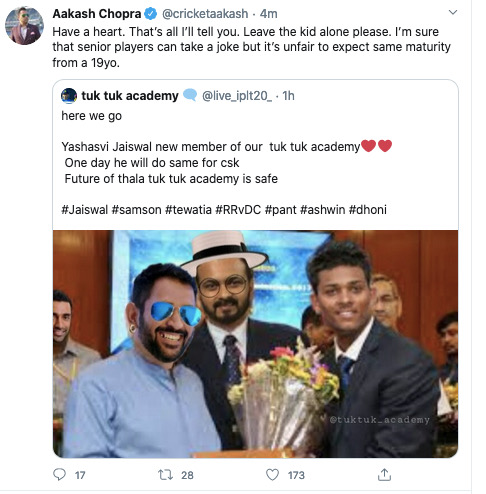