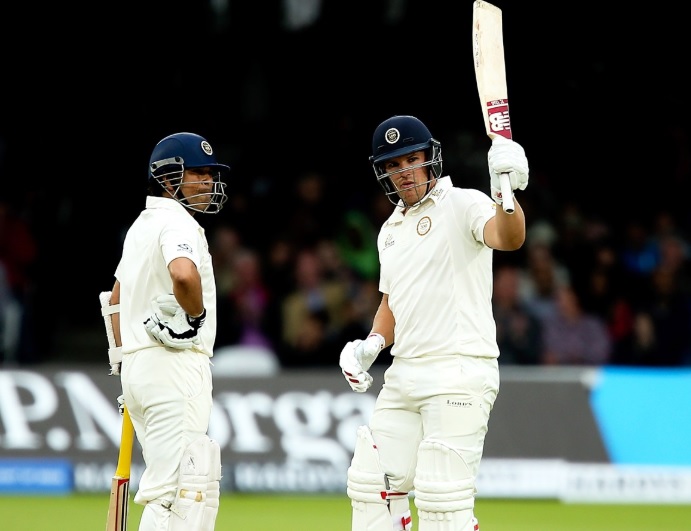 Australia’s ODI captain, Aaron Finch is known to relive memories he’s carried off the cricket field and recently he took fans back to one cricket match that he’ll ever remember through his life. Talking to Sony Ten Pit Stop, Finch cherishes the moments he spent in the middle batting alongside legend Sachin Tendulkar. Yes! the duo did bat together at the MCC vs Rest of the World XI game in 2014 which was played to celebrate Bicentenary of the Lords Cricket Ground.

Keep Sachin’s Wicket Intact
The atmosphere in the crowd just added that extra pressure on Finch as he walked out to the middle along with Tendulkar. And one thing he had to keep reminding himself is that at no cost should he run out the master-blaster. Finch, not known for his running between the wickets, said, “All I was thinking was – ‘Do not run him out, just do not run Sachin out.”

A Memorable Knock
For the record, Finch went on to score a match-winning unbeaten 181, and was involved in a opening stand of 107 with Tendulkar. Quite a delight for the fans watching the pair batting together. Many would have expected the game to go down as a friendly yet competitive affair and it rightly did. For Finch, a memory of batting alongside a cricket legend in Sachin Tendulkar will be etched forever.

Bicentenary Celebration Match
The Bicentenary Celebration match was a 50-over exhibition cricket match played between players representing the Marylebone Cricket Club (MCC ) and the Rest of the World XI (ROW) to mark the two hundredth anniversary of the Lord’s Cricket Ground (London). Sachin Tendulkar and Shane Warne led the two sides respectively. The match was played on the 5 July 2014 at Lords and saw the Tendulkar-led MCC side win by 7 wickets.