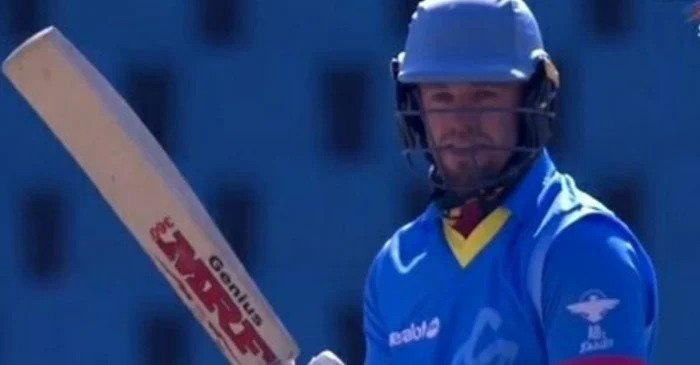 It’s a great sight to see players in the ground battling it out against each other. Fans really missed the cricketing action and now that it’s back, they can’t just get enough of it. AB De Villiers is one of the most loved cricketers around the world and seeing him in action always excites the fans.

This wish of fans was fulfilled when AB De Villiers came out to bat for Takealot Eagles in 3TC Solidarity Cup. The Eagles were at 54 after the start of the fifth over. This is when the Kingfishers’ captain gave the ball to their youngest bowler, Thando Ntini. For those unaware, Thando Ntini is the son of Makhaya Ntini.

Makhaya Ntini was present on the ground as a commentator alongside Graeme Smith. The 20-year-old speedster was out there to send a strong message. He was not at all overwhelmed by seeing the two experienced batsmen in the form of Aiden Markram and AB De Villiers.

The delivery that stunned De Villiers

Thando was right on target with a yorker. Markram got off the strike on the very first delivery and De Villiers came on strike to face the young lad. The sweltering pace of Thando stunned De Villiers who struggled to keep pace with the delivery. This eventually led to De Villiers going on the back foot and removing his shoe.

#Ntini coulda had #AB and #Markram in successive balls. #NtiniSr says “well tried my son” and he actually means it.

Ntini almost gets de Villiers.. that would have been huge #SolidarityCup

Makhaya Ntini was impressed with the way his son bowled to the stalwart. He appreciated his son’s efforts and laughed at the series of events that took place after the delivery. The twitter was fascinated with the young bowler as many people reacted to Thando’s bowling.