Sarfaraz Khan has been one of the most consistent batters in the Indian domestic circuit for the past couple of years but hasn’t got an opportunity to represent India in Test cricket yet. 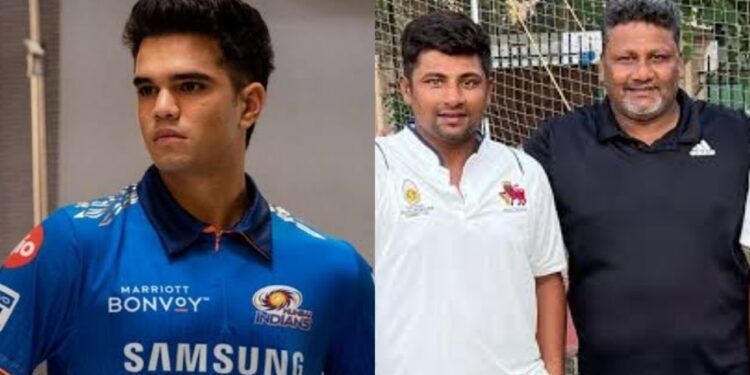 Mumbai batter Sarfaraz Khan is in all sorts of headlines after not getting included in Team India’s test squad despite scoring tons of runs in the domestic circuit across formats.

Sarfaraz Khan’s father, Naushad Khan, recalled a past discussion with his son when the latter had compared himself with Sachin Tendulkar’s son, Arjun Tendulkar.

Sarfaraz Khan’s father recalls a heartfelt discussion with his son

Sarfaraz Khan has been one of the most consistent batters in the Indian domestic circuit for the past couple of years but hasn’t got an opportunity to represent India in Test cricket yet. The selectors have faced some criticism over his exclusion from the squad despite him piling runs throughout the year.

Sarfaraz Khan’s father, Naushad Khan, while speaking to Indian Express, recalled a heartfelt discussion as Sarfaraz had momentarily compared himself to that of Arjun Tendulkar. The young batter believed Arjun Tendulkar had all sorts of resources.

“Abbu, Arjun kitna naseebwala hai na? (Arjun is so lucky). He is Sachin sir’s son and has cars, iPads, everything,” Sarfaraz had remarked as he compared himself with Arjun. Naushad Khan was clearly short of words as he didn’t reply to his child’s innocent remark.

However, just moments after drawing the comparison, Sarfaraz hugged his father and said, “I’m more fortunate than him. You can devote the entire day to me. His father is not able to give him any time.”

Sarfaraz was clearly not as blessed as Arjun as he had to struggle a lot to reach the position where he is today. His father, Naushad Khan, would do odd jobs to make ends meet and support his son in his cricket journey.

Sarfaraz Khan is termed a superstar of the Indian domestic circuit and has three consecutive blockbuster domestic seasons with the bat. He has scored 12 tons including one triple and two double-hundreds but all in vain as he’s still waiting for his debut India call.

WATCH VIDEO: PAK Women’s batter Nida Dar pulls out after bowler releases the ball; Netizens give her Out

Just after getting ignored for the 17-member squad for the first two Tests against Australia, Sarfaraz smashed one more hundred in the Ranji Trophy game against Delhi putting even more pressure on the national selectors to include him in India’s test squad.