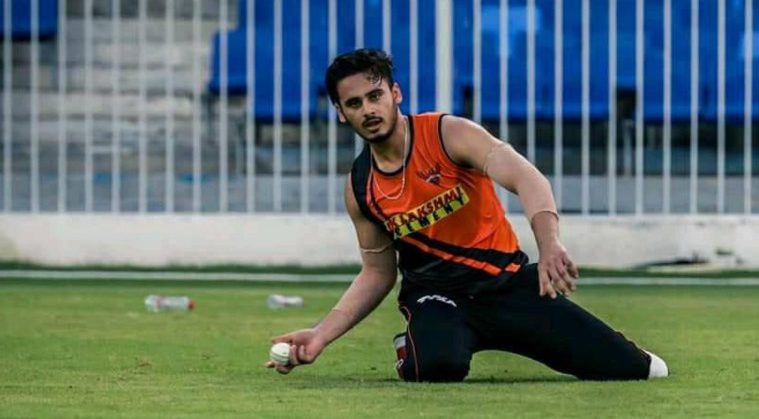 Sunrisers Hyderabad faced yet another defeat in their match against Kings XI Punjab on Saturday and are more or less out of the race to playoffs. They were able to restrict Punjab for 126, but the fielding effort by young Abdul Samad displeased a lot of people. The young lad tried his best to stop the ball, but ended up palming it to the boundary.

The Hyderabad franchise has lost 7 of their 11 games now and have only 8 points in their kitty, which makes it almost impossible for them to qualify for the playoffs. Sunrisers Hyderabad elected to bowl first to take advantage of the swinging conditions in Dubai and their bowler delivered as they didn’t bowl any freebies and kept their lines tight.

Abdul Samad pushed the ball over the boundary

The Kings XI Punjab batsmen found it difficult to score runs freely and as a result, they could only manage 126 runs in their quota of 20 overs. However, what caught everyone’s attention was the fielding effort by young Abdul Samad. In the 5th over of the Kings XI Punjab inning when Sandeep Sharma was bowling to Mandeep Singh, who came in as an opener in the absence of injured Mayank Agarwal.

On the fourth ball of the over, Mandeep Singh hit a regular shot to mid on for two, but the fumble by Abdul Samad turned it into a boundary. The fielder ran in fast and was able to get hold of the ball, however in trying to push the ball inside, he pushed the ball over the boundary rope. Twitter has reacted to the same and has come up with hilarious memes.

this is some another level of fielding collapse by samad.

Who is Samad's fielding coach 😂😂😂😂 #KXIPvSRH

After winning the match, Kings XI Punjab are still in contention of the playoffs. They have won 4 games on the trot and have 10 points after playing 11 matches. They need to continue their winning spree to be able to make it to the playoffs. Punjab will be playing KKR in their next match while Hyderabad will be facing off with Delhi Capitals.