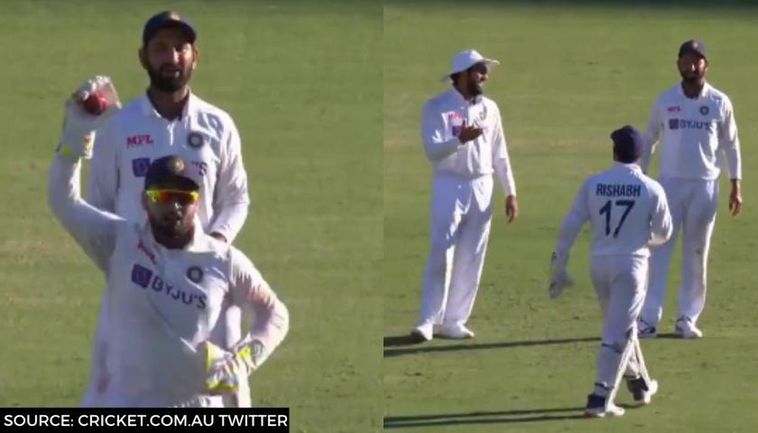 The last match of India’s tour of Australia has gone underway in The Gabba, Brisbane. The series is currently levelled at 1-1 and whoever wins the last Test will win the series. Almost two months of thrilling action will come to an end with the last Test of the Border-Gavaskar Trophy. On the first day of the fourth Test, Rishabh Pant persuaded the stand-in captain Ajinkya Rahane for a DRS, but the latter denied it.

Team India fared well on the first day, however, the advantage is slightly tilted towards the Australian side. The Australian batsmen came hard at the inexperienced Indian bowlers and tried to dominate them.

Team India has been facing major injury concerns ever since the Test series started. Despite the fact, they have been able to challenge the dominating Aussies on their home soil.

Team India started well by picking three important Aussie wickets under the score of 100. After that, Wade and Labuschagne took the charge and were involved in a century partnership. Natarajan fought back for team India and sent both the set batsmen back to the pavilion in quick succession. Post that, Green and Paine steadied the ship for Australia and made sure they don’t lose any more wickets till the end of day’s play.

Rishabh Pant was heaps keen on this one but he was getting donuts from the cordon! 😂 #AUSvIND pic.twitter.com/p4kHh536IZ

Rishabh Pant is well-known for making appeals in sheer excitement but most of the time those calls produce no results. In a similar incident, Pant was seen making another appeal off Natarajan’s bowling. The debutant bowled a tight delivery to Tim Paine which went past his bat very closely. Unlike his teammates in the slips, Pant started appealing and even asked Ajinkya Rahane to take the DRS.

Ajinkya Rahane politely dismissed his appeal and went against the wicketkeeper. The appeal by Pant may have been rejected, but it made for a good laughter for the Indian players. By the end of day’s play Australia stands at 274-5. Team India will have to pick quick wickets in the first session on the second day to be on the driving seat.