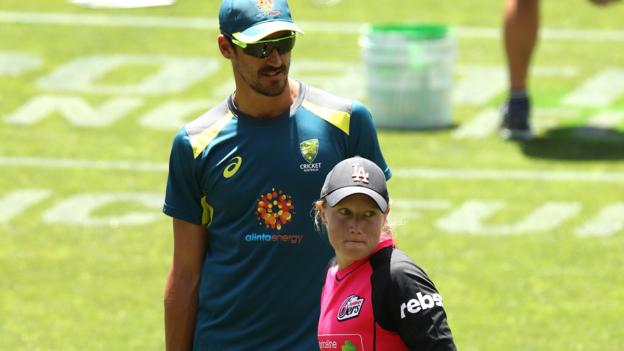 Australian woman cricketer Alyssa Healy was furious and slammed a Twitter user who trolled her husband, cricketer Mitchell Starc by using a picture of his during the last rites of late Phil Hughes. Healy was in no mood to tolerate and take in the uncalled-for trolling and hit back at the fan. Perhaps not intended to poke fun at Starc, the image used by the Twitter user didn’t quite go down well the Aussie keeper.

Alyssa Healy Hits Back At Fan
It all started when a user on Twitter remarked over Mitchell Starc’s decision to pick the T20 World Cup 2020 over IPL 2020. In the image posted on Twitter, and emotional Starc is seen at the funeral of late cricket Phil Hughes. However, the post was taken off later but not before Starc’s wife Healy hit back. She slammed the Twitter user for trolling her husband Mitchell Starc.

It was inappropriate for the fan to use a picture and reference to Starc’s emotions. Just one of those moments where fans seem to get carried away without realizing the consequences of their witty yet insensitive acts.

That’s actually the moment Phil Hughes passes away…. but sure use it for your idiotic meme.

Twitter User Apologizes
In what followed after Healy’s comment, the Twitter user was quick to render an apology on realizing that he had done something wrong. However, the user did clarify that it wasn’t intentional to hurt anyone over the post. While backing his post, the user replied – “Sorry, but it was just a satire, we love Starc and whole RCB fanbase wants him back. And yea We all Miss Phil..#Forever408”. It did not end there, and Alyssa Healy followed it up with yet another strong response, which is something that provoked the user to take off the posts completely.

Justification Not Gone Well With Healy
The user who said that his post was ‘just a satire’ was in for another backlash from the already furious Healy. She replied – “Satire is supposed to be funny. This isn’t”

Satire is supposed to be funny. This isn’t.

As a cricketer, the least you could expect from fans is to find humor in everything, not at the expense of causing hurt to others.