Chennai Super Kings were eliminated from the race to playoffs after their huge loss against Mumbai Indians. 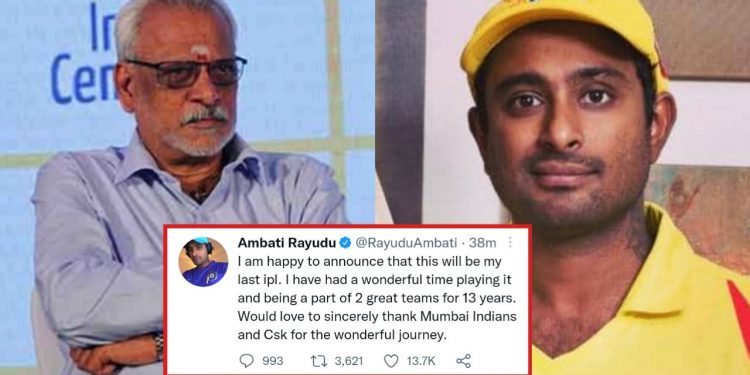 The ongoing season has been a nightmare for Chennai Super Kings who took to the field in IPL 2022 to defend their title. Their performance has been utterly disappointing and they have been ousted of the tournament. Their star players couldn’t perform to their potential and one of them is Ambati Rayudu who has not had a great season. The star CSK batsman shocked the fans with his latest post as Ambati Rayudu posts retirement Tweet.

Chennai Super Kings have had one of the worst seasons this year in the history of IPL. The team has played 12 matches and has only won 4 matches. Their last match was against Mumbai Indians which saw them struggling even more as they were bundled up for just 97 runs. The loss in that particular match confirmed their exit from the tournament. Following the loss, one of their most consistent players Ambati Rayudu posts retirement Tweet, but deleted it later.

Ambati Rayudu has been a vital cog in Chennai’s setup and has been a regular performer for the yellow army. He posted a Tweet today afternoon which shocked the fans; however, the tweet was deleted later. After the tweet was deleted, CSK CEO Kasi Vishwanathan came up with a clarification where he mentioned that Ambati Rayudu is not going to retire and will continue to be a part of Chennai Super Kings.

No no he's not retiring. Maybe he wasn't happy with his performances and might have put it out. Just a psychological thing, I reckon. He'll be with us.#IPL2022

ALSO READ: ‘Umran Malik has pace but…’ – Mohammed Shami has his say on the SRH speedster

The post by Ambati Rayudu caught the attention of many before it was removed from the micro-blogging site and has since gone viral. The fans are confused about what’s going on in the CSK camp and are hoping that everything is fine as far as the management is concerned. The CSK fans will hope for an improved performance from their team in the next season of the tournament and the franchise will also try to entertain their fans next year.