MS Dhoni was seen biting his bat in the dressing during the match against DC last night. 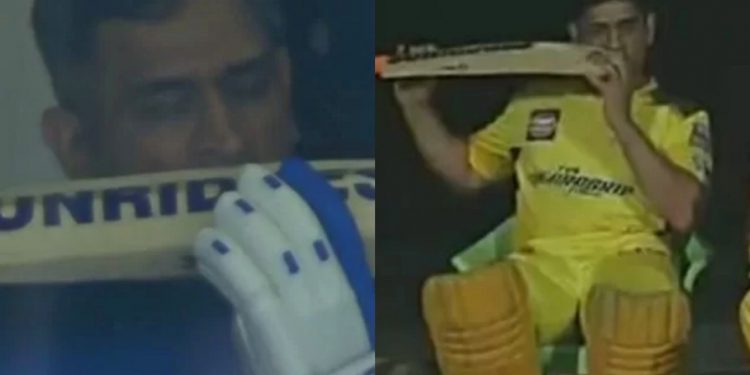 MS Dhoni, soon to be 41, has shown that age is just a number in his case in the ongoing IPL 2022. He has continuously shown and proven his wicket-keeping skills and his neve-ending finishing abilities despite having to lead his side, CSK, once again post Ravindra Jadeja’s handing over of the captaincy last week.

All the while, veteran leg-spinner Amit Mishra, a former India teammate, has come through to help us understand why the renowned skipper ‘eats’ his bat prior to actually going out to bat. Mishra claims that the two-time World Cup winner does this to keep his bat neat and tidy and that there is never a single bit of tape or thread springing out of his bat.

You won’t see a single piece of tape or thread coming out of MS’s bat: Amit Mishra

Amit Mishra took to his official Twitter handle to explain Dhoni’s habit, saying,”In case you’re wondering why Dhoni often ‘eats’ his bat. He does that to remove the tape of the bat as he likes his bat to be clean. You won’t see a single piece of tape or thread coming out of MS’s bat.”

In case you’re wondering why Dhoni often ‘eats’ his bat. He does that to remove tape of the bat as he likes his bat to be clean. You won’t see a single piece of tape or thread coming out of MS’s bat. #CSKvDC #TATAIPL2022

And in the meantime, Mishra struggled to sell at the IPL 2022 mega auction in February. He did, nevertheless, tell DC Entertainment President Parth Jindal that he would always be readily accessible for the franchise in any role. The leggie has made an impression on social media in recent months.

MS Dhoni once again proved to be a dominant force as he played the finisher’s role to perfection in Chennai Super Kings’ last battle against Delhi Capitals at the DY Patil Stadium in Navi Mumbai. Eventually, the match ended in CSK’s favour as they took a huge 91-run victory against DC. MS Dhoni remained unbeaten at 21 from just a mere 8 deliveries which included one four and two sixes at an outstanding strike rate of 262.5.