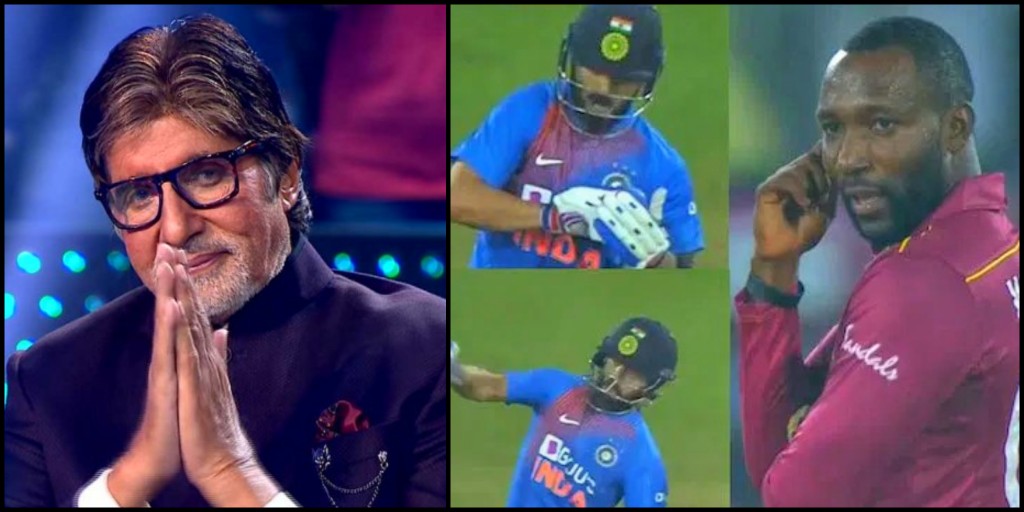 Cricket fraternity hailed Virat Kohli after his another masterclass in India vs West Indies first T20 match. The Indian skipper smashed unbeaten 94 off 50 balls as India chased down 208 in 18.4 overs. This is the highest target chased by India in T20 international cricket. Also, Virat Kohli surpassed his previous best score (90) in T20Is.

During the 16th over of the innings, 31-year old mocked West Indies bowler by imitating his notebook celebration. Virat revealed that this was his reply to the bowler for giving him the same send-off in 2017 at West Indies. Fans loved the aggressive reply of Kohli to Kesrick Williams.

Translation of Bachchan’s tweet is, “Man how many times have I told you, do not tease Virat. But, you don’t listen to me. Now he wrote a slip and gave it in their hand !!!! See see .. look at West Indies’ face; he killed it, he killed it !!” Virat Kohli replied to the legendary actor’s praiseful tweet. Kohli wrote, “Haha love the dialogue Sir. You’re always an inspiration.”

However, India didn’t have smooth progress to the win in the series opener. Their bowling was not up to the mark as they conceded 15 sixes during the innings and also they were not helped by the fielders as they dropped some catches. Although, during the chase, Virat Kohli and KL Rahul’s 100-run partnership put India to a strong position. At the end, Virat Kohli accelerated the innings and India succeeded to win the match with 8 balls to spare.