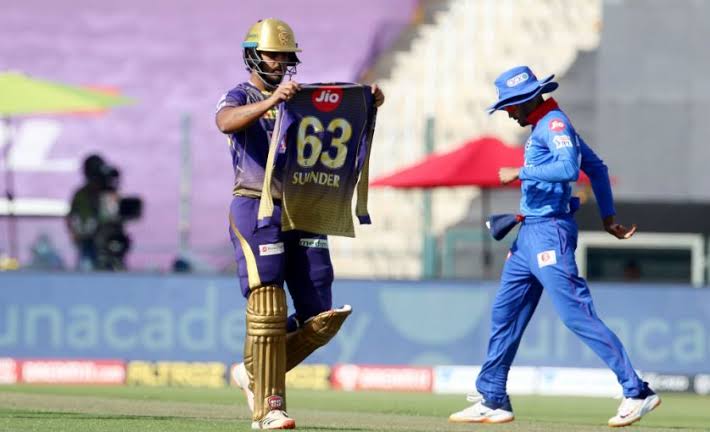 You need to have strong emotions to take to the cricket field after a demise in the family, and Nitish Rana did exactly that. In the Indian Premier League group stage game against the Delhi Capitals, Nitish Rana nothced up a fifty and dedicated it to his late father-in-law Surinder Marwah who passed away yesterday to cancer.

It was an emotional sight for cricket fans and players who witnessed Nitish Rana’s tribute to his late father-in-law.


Having reached his half-century, Rana displayed a jersey of his team Kolkata Knight Riders with his father-in-law Surinder Marwah’s name printed on it. Surinder Marwah passed away to cancer.

A heart-warming tribute from @NitishRana_27 to his father-in-law, who passed away yesterday. Surinder Marwah.

Rana’s 81 Helps KKR Reach 194/6
Striking at a rate in excess of 150, Nitish Rana’s 81 off just 54 balls help Kolkata Knight Riders (KKR) reaching a commanding 194/6 in their allotted 20 overs. The Knight Riders are seeking a win that will tighten their grip on fourth place. A useful 64 off just 32 balls from Sunil Narine saw the KKR innings end on a high after the initial hiccup of being reduced to 42/3. The match follows the embarrasing defeat that KKR faced in their last outing against the Royal Challengers Bangalore.

Emotional Gesture Has Fans Pouring Their Hearts Out
Nitish Rana’s emotional tribute left fans with emotional responses on social media. The gesture was instantly trending. Rana’s resilience at the crease and approach to the game completely took away the loss he’s gone through. Nitish Rana’s display is definitely one which will be the talking point of this season’s Indian Premier League.

With tougher days to follow in the tournament, KKR will only hope for Rana to keep delivering with the bat and see the team through to the play-offs, perhaps even notch up the title that has eluded them for a while now.