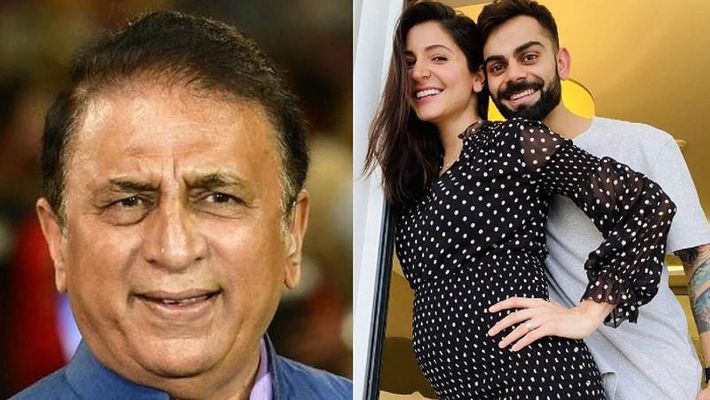 Sunil Gavaskar has evoked a flurry of criticism from fans over his recent comments on Virat Kohli and his wife Anushka Sharma. Royal Challengers Bangalore skipper Virat Kohli had a forgetful outing against the Kings XI Punjab. Not only did his side succumb to a 97-run defeat but Kohli had a nightmare on the field – dropping two catches and scoring just 1 run. This led to Gavaskar landing a personal comment over Virat and his wife which in return triggered angry fans to call for his ouster from commentating.

Gavaskar’s Dig At Kohli’s Poor Performance
Kohli’s poor show against the Kings XI Punjab triggered a completely uncalled for and nasty dig from cricketer-turned commentator Sunil Gavaskar. Referring to a social post during the lockdown in which Kohli was seen batting to deliveries bowled at him by his wife Anushka Sharma, Gavaskar commented – “Inhone lockdown me to bas Anushka ki gendon ki practice ki hai.”

If he was referring to Anushka bowling to Virat in lockdown or the other and the more controversial way, it is wrong to drag someone's wife in this totally unrelated matter. Moreover, after she's been targeted for many years. #SunilGavaskar #KXIPvsRCB

Do not fcking give excuses for that statement. Even if he was referencing that video of him and Anushka, you can fcking see another man there who was Anushka's cricket training coach for Jhulan

If Gavaskar said that for real swear to GOD HE DESERVES HIS MOUTH TO BE BROKEN!!!!!!!

Gavaskar sir have u now completely lost it or something? A senior cricketer saying such stuff about anyone let alone ICTs captain. Man u lost all the respect we had for you.

I know this was meant to be taken as joke because he was playing cricket with her during lockdown. But 🤮🤮🤮 https://t.co/diZ8WJ1AAu

What followed on social media was an outburst from fans who were angered with what Gavaskar had said. On a professional note, it deemed incorrect to pull personal relations into the game; something that Gavaskar seems to have overlooked. Moreover, they feel the choice of words used by Gavaskar can be interpreted in more than one way. Few fans even called for Gavaskar to be removed from the commentator’s panel for delivering such comments.

KL Rahul Makes RCB Pay
Kings XI Punjab skipper KL Rahul had a memorable game against the Royal Challengers Bangalore. Not only did he lead his side to a record 97-run win but also amassed the highest score by a skipper in the IPL when he went on to score 132 not out (off just 69 deliveries). Rahul will have the RCB fielding to thank for, as he was dropped twice enroute his record innings.

Unforgettable Outing For Virat Kohli
Not often are fans witness to Virat Kohli dropping a catch…(to sound worse, he dropped two against Kings XI Punjab). For Kohli himself has set high standards while fielding and his poor performance is something he would want to get over. Kohli wasn’t good with the bat either as he fell for just a single run. Indeed an unforgettable outing for the RCB captain.

But as the league goes, Kohli would want to get back to his best – in the field and with the bat as well. Prove critics, perhaps even Sunil Gavaskar wrong.