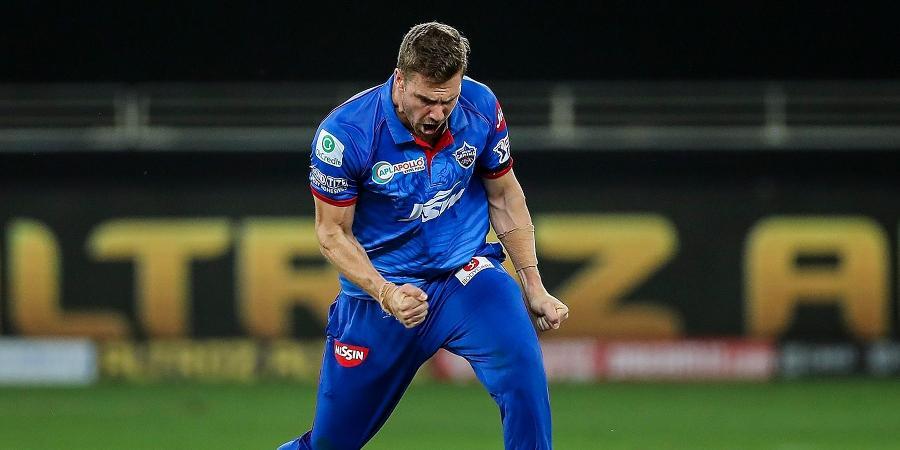 Just a week ago, Delhi Capitals Anrich Nortje bowled the fastest delivery at this season’s Indian Premier League. The lanky pacer from South Africa was at it again, this time sending down a fiery “fireball” at Sunrisers Hyderabad batsman Manish Pandey that left him rattled and clueless. The delivery, a yorker bowled at pace, missed the stumps by a whisker.

Anrich Nortje’s “FIREBALL”
It happened during the 19th over of the Sunrisers innings. Pacer Anrich Nortje’s was given the responsibility of bowling the penultimate over, and perhaps restrict the run flow. The fourth delivery, the “Fireball”, bowled by Nortje to Manish Pandey left almost everyone awe-struck. It was a full delivery, a yorker perhaps that came in charging towards the batsman and went through his legs to the keeper. Manish Pandey had no clue on how to get the delivery away, missed it completely and had him in an awkward position at the end of it.

Fireball Leaves Fans In A Frenzy
The Godrej awe-struck moment of the day left fans in a frenzy. Social media was instant to react to Nortje’s delivery, something that many “missed”, just as Manish Pandey did. The delivery brought out the best of death bowling, something that is every bowler’s delight in the T20 format dominated by batsman. Most fans were in awe of the delivery that can easily be rated as one of the best seen at this season’s IPL; if only it could have the wicket of Manish Pandey at the end of it.

Sunrisers Win, Keep Playoffs Hopes Alive
The Sunrisers Hyderabad notched up an emphatic win over the Delhi Capitals and kept the hopes of making it to the playoffs alive. The architect of the Sunrisers win was Wriddhiman Saha, who on his recall scored a quickfire 87 (off just 45 balls), and took the score to a challenging 219. The Delhi Capitals innings never gained momentum in the runchase and eventually folded up at 131. The win sees Sunrisers move to within 2 points of the playoffs spot.