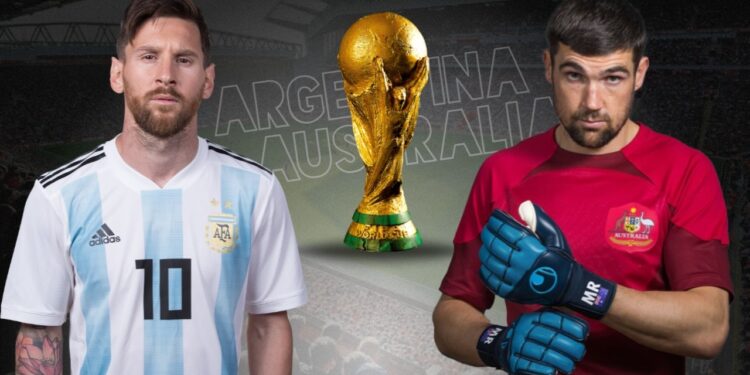 Argentina and Australia to meet in Round of 16 (Pic - Twitter)

The pre-quarter-finals of FIFA World Cup 2022 will commence today. Two games are scheduled to play today, first Netherlands will face the USA, and the much-awaited match between Argentina and Australia will take place later tonight. The live telecast of Argentina vs Australia match will be available to watch on TV channel in India while streaming can also be watched on the OTT app. Here you will find broadcasting details of FIFA World Cup round of 16 matches.

Australia will play their first World Cup pre-quarter-final since 2006 while Argentina have cleared the group stage for the 15th time in the tournament’s history. In the last edition in 2018, Lionel Messi and co’s dream was demolished by mighty France in the round of 16. But this year, Messi is here for a long run as he is playing his last World Cup. Argentina and Australia have played 7 matches before this, out of which the former won 5 while the Aussies could win only one game.

Viacom 18 owns the broadcasting rights of the FIFA World Cup 2022. So, in India, the live telecast of the Argentina vs Australia match can be watched on Sports 18 channel. The channel is available in SD and HD formats and both channels will provide the live feed of mentioned FIFA WC game. Indian viewers who want to watch Argentina vs Australia ’round of 16′ game’s live telecast in Hindi can tune in to the MTV HD channel. However, the free-to-air channel Sports 18 Khel won’t broadcast any of the World Cup games today as it will show T10 League.

Argentina vs Australia channel number on DTH services in India:

Viacom 18-owned Jio Cinema app will stream Argentina vs Australia game today. It’s worth mentioning that this app is absolutely free and can be accessed by all telecom operators including Jio, Aitel, Vi, etc. The app can be downloaded on mobiles, tablets, and smart TVs. While ARG vs AUS match can be telecasted live on laptop devices via Jio Cinema’s official website.

There are some alternate options to stream FIFA World Cup like Jio TV and Vi Movies and TV apps but only Jio and Vi users can access these OTT services. Meanwhile, Tata Sky DTH users who have activated Sports 18 and MTV HD channels on their set-of-box can watch them on their mobiles or tablets using the Tata Play app.

Argentina vs Australia, FIFA World Cup 2022 Round of 16 Match