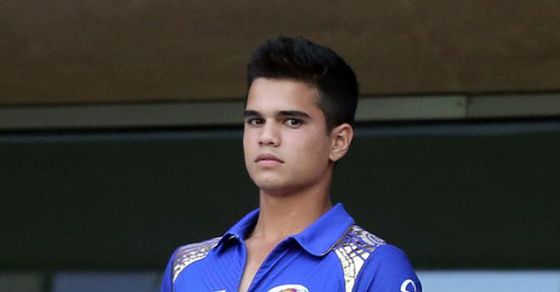 The IPL extravaganza is soon going to grace our TV screens and all the fans are pretty excited about it. Devoid of any cricketing action for so long, IPL is surely going to be a treat for the Indian fans. All the teams are busy with their outdoor training sessions currently and gearing up for the 13th edition of the tournament.

In the meantime, Indian batting legend Sachin Tendulkar’s son Arjun Tendulkar was spotted with the MI players. After seeing the picture, fans are confused whether he has joined the franchise. He was seen enjoying in the pool with the likes of Trent Boult, Rahul Chahar and James Pattinson.

For the uninitiated, Arjun wasn’t a part of the IPL 2020 auction and hasn’t made his IPL debut yet. Arjun has been with the team in the past as well, however MI camp hasn’t signed him yet. There is a great lack of net bowlers and Arjun is there to fill in that gap for the Mumbai Indians. Previously, Arjun has even bowled in the net sessions of Team India.

Though there is no confirmation yet, Arjun may still be picked as a replacement player. All the franchises have the liberty to rope in replacement players in case they need any during the course of the tournament.

The 13th season of the tournament will be played under a bio-secure bubble and players won’t be allowed to leave the zone. During the matches, pre-recorded crowd chants will be played to enhance the confidence of the players in the ground.