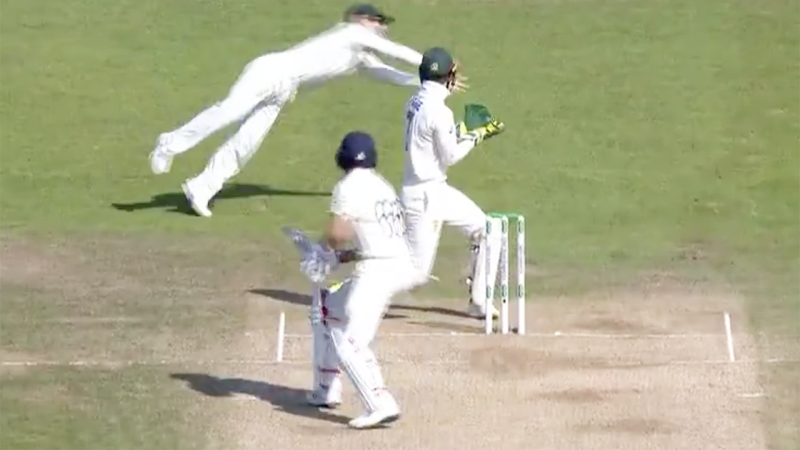 David Warner stunned the England skipper Joe Root after he took a spectacular catch to dismiss the latter on the fourth day of the third test match of the ongoing Ashes. Root departed in the sixth over of the day scoring 77.

It was Nathan Lyon who picked the wicket after bowling a flighted delivery to Root who came down to the crease to find an inside edge that touched the pads and flew behind the keeper. Warner, who was standing at first slip, dived to his left to complete an outstanding catch.

Watch the video of the wicket here.

However, Root’s wicket was not enough for Australia as they failed to clinch a victory and missed a chance to retain the Ashes. Australia went on to lose the match by one wicket against England who were rescued by Ben Stokes’ splendid century.

Stokes remained unbeaten on 135 from 219 balls and played an exceptional knock for his side guiding them to level the series 1-1, it also keeps the Ashes alive for the hosts.

England slumped to 286 for nine and needed 73 runs more to win. Stokes single-handedly completed the chase as he played the innings of his life once again proving to be a match-winner for the English side. Stokes stitched a 76-run partnership with last man Jake Leach whose contribution was only one run that came in the end.

Stokes’ innings was laced with 11 fours and eight sixes, he was batting on 61 when Stuart Broad’s wicket was down and from there he pulled out his side with raining boundaries around the Headingley Stadium. He was on business targetting Lyon whom he smacked a total of four sixes. Stokes without ay doubt won the man of the match award.

England and Australia will meet each other on September 4 for the fourth Test at Emirates Old Trafford, Manchester. The match starts at 3:30 PM according to IST.