Ashwin who came to bat at no.3 was seen experimenting with his stance against Kuldeep Yadav. 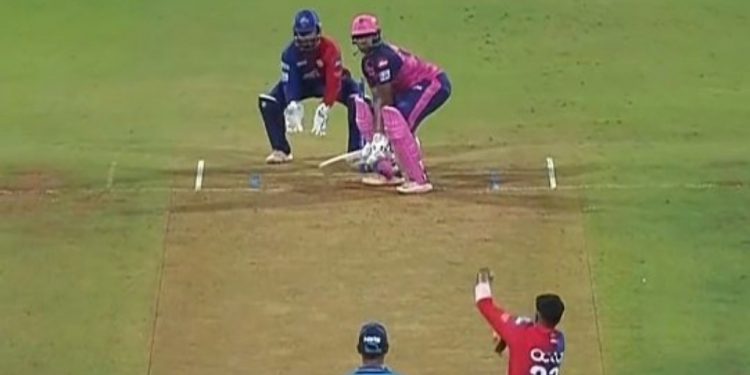 ‘Ashwin is down to earth person’ was one of the hilarious comments made by the people on Twitter about the right-arm magical spinner R Ashwin. On Wednesday, Rajasthan Royals(RR) faced Delhi Capitals(DC) in the 58th match of the Indian Premier League (IPL) 2022 in the DY Patil Stadium, Mumbai.

Winning the toss, DC opted to bowl first, just as every other team did in this season of the IPL. Rajasthan Royals had been in a good form lately, as recently they had won a match against Punjab Kings in the 52nd match. Sanju Samson’s side has made one change in their last game with Yashasvi Jaiswal returning to the top of the order, replacing Karun Nair. Shimron Hetmyer, who returned home for the birth of his first child, is expected to be replaced by Rassie van der Dussen. DC on the other hand made one change as Ripal Patel was substituted with the handy off-spinner Lalit Yadav who could target Jaiswal and Padikkal in the powerplay.

The innings started off with Rajasthan Royals’ star batter Jos Buttler and the substitute Yashasvi Jaiswal. Chetan Sakariya initiated the bowling side’s attack. The first over went decent with just a mere 5 runs in the over. Sakariya came into the attack in the 3rd over again and bowled a beautiful delivery which Buttler didn’t get anywhere near the middle of the bat and dragged it off the thick inside half straight to mid-on to Shardul Thakur’s safe hands.

R Ashwin notched a fifty after coming to bat no.4

Ravichandran Ashwin walked in with a gritty look this time from the dressing room, determined to score big this time for the Royals. The off-spinner played every ball decently until to a point he was seen doing something hilarious.

As Kuldeep Yadav came in the 7th over, Ashwin was ready to give his all this time. R Ashwin made a hilarious stance in front of the leg spinner where he was seen bending a little more to the ground and trying hit it hard but all that was in vain. Although, he ended his innings with 50 runs in his bag. Below are some reactions on Ashwin’s weird stance.

Ashwin is so humble. Very down to earth guy

nora fatehi got some competition

He treats IPL as an experiment lab !😅

Twitter hilariously applause to this act and stated it as “Ashwin being a down to earth guy.”

ALSO READ: Another umpiring howler in IPL 2022 as wrong batter took the strike in RCB vs SRH match

Later in the match, Ashwin portrayed his brilliant experience with the bat as he scored his maiden IPL half-century in the match before getting caught by Mitchell Marsh in the 15th over. Ashwin scored his maiden 50 in just 38 balls which included four boundaries and two sixes. Rajasthan Royals put up a decent total of 160/6 in 20 overs of their innings.