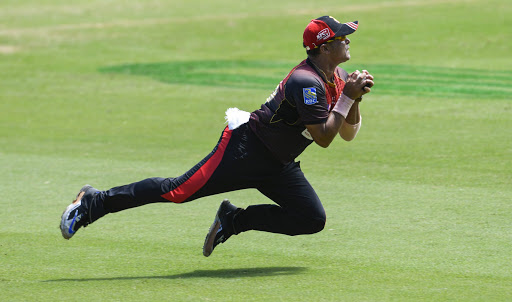 Age no bar – is synonym to cricketer Praveen Tambe. A classic example of sheer dedication and passion for the game that has seen him play even today at the age of 48. Yes! Praveen Tambe is 48, and he took a spectacular tumbling catch in the ongoing edition of the Caribbean Premier League (CPL T20).

Tambe Continues To Shine In CPL T20
Praveen Tambe who became the first Indian player to feature in the Caribbean Premier League T20 when he turned out for the Trinbago Knight Riders is having a gem of a season so far. In match 29 against St Kitts and Nevis Patriots, Tambe was not only economical with the ball (his figures 4-0-9-1) but he also pulled off a blinder of a catch to dismiss Ben Dunk. Tambe’s economical spell choked the Patriots run flow and were bundled out for a mere 77; going on to lose the game by 9 wickets.

Tambe’s Brilliant Catch
It was sight for any cricketer or fan to not miss out on. Forty Eight year old Praveen Tambe had ran in from short third man, inflicted a full length dive and pulled off a catch out of no where. The ball was all set to land safely after a mistimed reverse hit by Patriots batsman Ben Dunk. But Tambe had other ideas and gave it his all in sending Dunk back to the pavilion.

Tambe Makes History As Knight Riders Continue to Dominate
When Praveen Tambe  was named in the Trinbago Knight Riders squad for the 2020 Caribbean Premier League, he became the first Indian cricketer to get a contract in the Caribbean Premier League. On 26 August 2020, he featured  in the match against the St Lucia Zouks, thereby going on to become the first Indian cricketer to play in the CPL.

His team the Trinbago Knight Riders’ (TKR’s) are having a dream run in the tournament so far, having won all of their ten games. A dream start for Tambe too, and with clinical performances like these, he is sure to have a longer run in his career…. well he’s only 48!