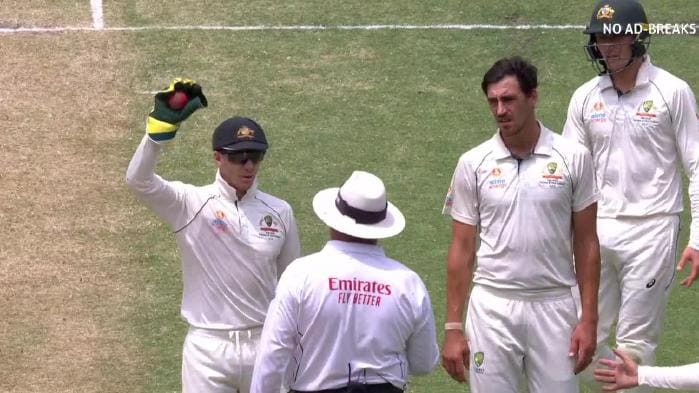 Australia vs New Zealand: Poor Decision By Third Umpire as the ball clearly hits glove: In ongoing Australia vs New Zealand  Test match, Team Australia is on the driving seat as they have already taken up the lead of 442 in the second innings with remaining 6 wickets in hand. Meanwhile, once again the umpiring standard comes under the scanner as DRS failed to get that the ball is hitting the batsman glove.

It all happened in the 37th over of the Kiwi’s innings, when Mitchell Santner was on the strike and Mitchell Starc bowled an absolute snorter (138.9km/h), short ball, and Santner is visibly intimidated. Santner was unable to get on top of the bounce and Trevis Head Caught the ball. And then there was an appeal for the catch from Australia, however, the umpire didn’t get anything. Thereafter skipper Tim Paine decided to go for the review but it also went in vain.

Actually, the TV umpire Aleem Dar chose to stay with the on-field decision after failing to find any conclusive evidence. Although in the replay, we can clearly get that the ball from Mitchell Starc hitting the batsman gloves. The official Twitter handle of Cricket Australia has posted the video of the incident on their twitter handle.

Cricket Australia wrote in the caption, “The third umpire Aleem Dar decided he couldn’t overturn the call made by Marais Erasmus – what’s your call?.” Here we are attaching the video of the same below.

Here is the video (Australia vs New Zealand: Poor Decision By Third Umpire as the ball clearly hits glove)

Australian former cricketer Shane Warner criticise the decision from the umpire while talking to Foxsports.com.au. “The sweatband clearly moved and it should have been overturned,” Warne told foxsports.com.au. “Sometimes the umpires get it wrong, but I don’t think Dar sees enough of the vision either. He should have asked for more angles before making his decision and I believe he got it wrong.” Warne said.

And also the former Australian skipper Rickey Ponting has also criticised the decision of the umpire.“That has been missed by the third umpire, absolutely as plain as day … if you can’t get that right, then you shouldn’t be doing it”, Ponting said on Channel 7. “(The sweatband) clearly moves before it goes into the forearm guard. That, in my opinion, is conclusive evidence. (Out), 100 per cent. We could all see that clearly. The sweatband was definitely moving on the glove.