Rain might play spoilsport in the 2nd NZ vs IND T20 as well. 70% chance of rain predicted during match hours. 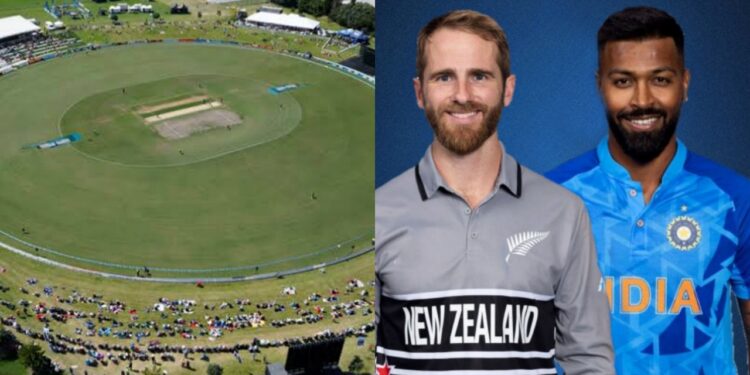 After the 1st NZ vs IND T20 was washed out due to rain today, now the teams will be moving to Bay Oval for the next game. The second T20 is set to be played on Sunday at Mount Maunganui after which Napier will be hosting the final game, on Tuesday. Both sides would be hoping for decent weather in the upcoming games, unlike as it was Wellington where even the toss couldn’t take place. Find ahead the Pitch Report of Mount Maunganui’s Bay Oval for the 2nd NZ vs IND T20.

As the 3-match series has unfortunately been reduced to just 2 games owing to the washout, both India and New Zealand will have to be on their toes in order to win the trophy. Hardik Pandya will be leading a young T20 side in the absence of Rohit Sharma, Virat Kohli, and KL Rahul. Youngsters like Shubman Gill, Ishan Kishan, Umran Malik, and Mohammad Siraj would be seen playing against NZ.

The hosts would be eying to not give the comparatively young Indian side an edge over them. Captain Williamson would be keen to score some good runs and prove that he’s to stay in the shorter format as well.

The sides batting first have had much greater success as compared to the side chasing a total at the Bay Oval. 9 out of the 12 games played here have been won by the sides who’ve batted first.

The Bay Oval pitch is a belter of a surface where the batters score plenty of runs. The even bounce of the pitch makes the batters feel free to play their shots and the short boundaries aid the scoring rate even more. The bowlers find little to no help from the Bay Oval surface normally. However, as overcast conditions have been predicted for this game, the pacers might find some movement initially.

Usually, any side after winning the toss would look to bat first and put a big total on the board at this venue however, for this game the captains might look to field first considering the weather.

The 2nd T20 as well is set to be affected by the weather as there is a forecast for rain on Sunday. Thunderstorms have been predicted during the evening and there is a 70% chance of rain during the match hours.