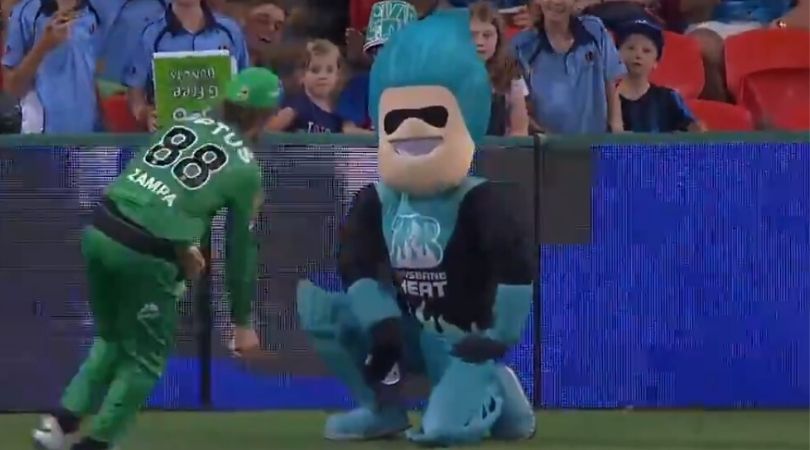 BBL 2019- Adam Zampa Scares Brisbane Heat Mascot: On Thursday, during the fifth match of the ongoing ninth season of the Big Bash League (BPL), Melbourne Stars spinner Adam Zampa appeared to tease the hosts’ mascot. This become one of the special moment so far in the league. This match was played between Brisbane Heat and Melbourne Stars at the Carrara Oval.

It all happened in the second ball of the second over when Brisbane Heat opening batsmen Tom Banton and Max Bryant were on the crease. Meanwhile, Tom Banton swept visiting spinner Sandeep Lamichhane towards deep square leg. There was no fielder placed at the boundary and the ball was easily reached to the boundary line.

While the Heat’s mascot was sitting near the boundary line, he didn’t make the effort to throw back the ball. And Adam Zampa, who was fielding inside the circle on the leg-side, has to run all the way to get back the ball. This made the Australian Leg Spinner to tease the Heat’s mascot and gave the impression of scaring the mascot as he picked the ball and gestured as if he was about to throw it towards the mascot.

The visiting spinner didn’t seem to be happy with the hosts’ mascot. In the video, we can see the reaction of the spinner, however, more epic was mascot’s reaction. Here we are sharing the video of the incident at the end of this article.

Short Summary of the Match (Brisbane Heat vs Melbourne Stars)

Earlier in the match, Brisbane Heat after winning the toss opted to bowl first at Carrara Oval in Queensland. Meanwhile, Melbourne Stars manage to score 167-7 at the end of the 20 overs. From Melbourne Stars skipper Glenn Maxwell scored a destructive inning of 83 off just 39 balls. In the reply, Brisbane Heat could manage to score only 145-8 at the end of the 20 overs. And hence lost the match by 22 runs. From Brisbane Heat opener Tom Banton played a decent inning of 64 off 36 balls, however, it was not sufficient. Captain Glenn Maxwell announced as the ‘Player of the Match’ for his 83 off 39 balls.

Watch til the end for Adam Zampa keeping the @heatBBL mascot on his (?) toes! 🤣 #BBL09 pic.twitter.com/2YkfnM6w1I