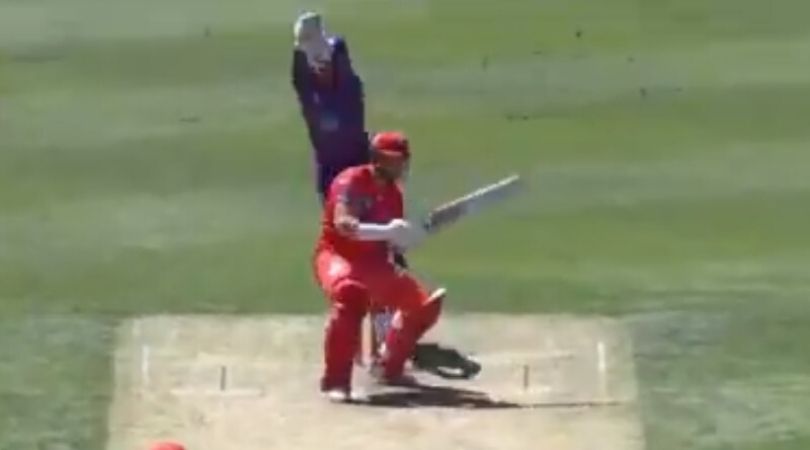 BBL 2019- Spinner Qais Ahmad stuns everyone with a deadly bouncer: The ninth edition of the Big Bash League is at its apex stage. Meanwhile, in the 11th match, one of the rare scenes in cricket has made its impression. Actually, a spin bowler has made a deadly bouncer which have shocked everyone.

During the match played between Hobart Hurricanes and Melbourne Renegades in Hobart, Hobart Hurricanes’ spinner Qais Ahmad bowled a surprising bouncer. It all happened in the ninth over when Melbourne Renegades’ batsman Shaun Marsh was on the strike. He was about to face the spin ball but surprisingly he got an uneven delivery from the spinner like a medium pacer. This delivery from Qais Ahmad stunned everyone on and off the field.

Meanwhile, the wicket-keeper Ben McDermott also left in wonders as he ended up missing the ball. Deadly bouncer from the spin bowler didn’t work for his team and in results, the opponent team got four byes. Qais Ahmad bowled this deadly bouncer at the speed of 121.6 KPH which was just like a medium pace bowler. Here we are sharing the video of the incident at the end of this article.

Sort Summary of the Match (Hobart Hurricanes vs Melbourne Renegades)

Earlier in the match, after winning the toss Melbourne Renegades decided to bat first. Meanwhile, in the first innings, they had scored 147 before getting all out in the last over. From Melbourne Renegades skipper Arron Finch was the highest scorer as he scored 50 off 37 balls.

In the reply, Hobart Hurricanes chased down the score in the first ball of the last over with remaining 7 wickets in hand. From Hobart Hurricanes D Arcy Short and Ben McDermott played decent innings and helped the team to win the match. D Arcy Short scored 60 off 45 and Ben McDermott scored unbeaten 51 off 48 balls. Riley Meredith was awarded ‘Player of the Match’ for his 3 wickets with an economy of 6.50.

Qais Ahmad surprised everyone with this … but did he give the keeper the secret signal!? 🤔🤔