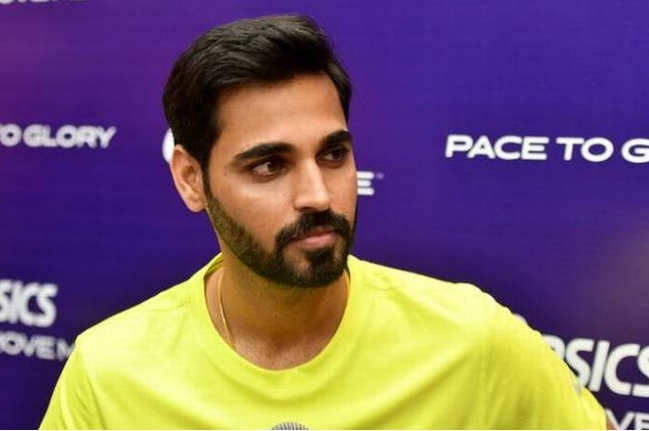 Most cricketers wish their successful careers on the pitch are later portrayed onto the cinema screen either through a biopic or a movie of sorts. It pours out to the fans a lot more about a cricketer than just his usual life both on and off the field. In a recent conversation, Indian pacer Bhuvneshwar Kumar revealed one talented Bollywood actor whom he’d want to feature as himself  if ever a cricket movie on him was made.

Bhuvneshwar Picks Bollywood Actor For His Role
It was quite an intriguing choice Bhuvneshwar Kumar made when he picked one talented actor to play his role in a cricket flick on himself. When he was asked to pick one actor who could play his role perfectly well, he didn’t hesitate to name Rajkumar Rao. Referencing to an earlier remark, Bhuvneshwar added, “Once somebody suggested that Rajkummar Rao has a lot of similarities with me in terms of physical appearance. So he could play my role in my biopic.”

Plans Of Setting Up An Academy
Bhuvneshwar has been immensely grateful to the support and recognition he has received through cricket. And when it comes to giving it back, there is no better way then helping with the development of the sport in his hometown of Meerut. He plans on setting up a cricket academy that will nurture cricketing talent in and around Meerut. Talking at a webinar, he revealed – “I want to open an academy in Meerut because it has given me so much. I just want to give it back to the people over there. That is something I am going to do for sure.”

Bhuvneshwar Kumar was out of action for some time after nursing a sports hernia injury earlier in the year.