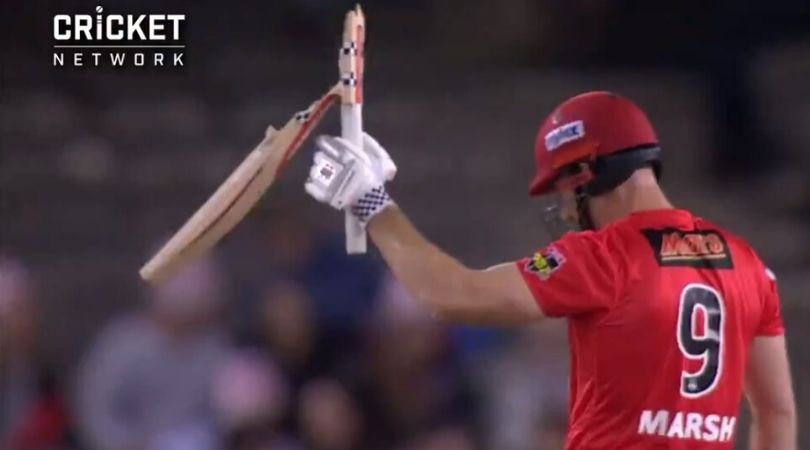 After Renegades lost 7 matches in Aaron Finch’s captaincy, he chose not to play 8th match of Renegades. He depart to India with Australian teammates for the upcoming ODI series. Glenn Maxwell who is not the part of Aussie ODI squad continued his outstanding form in Stars vs Renegades match.

One side Aaron Finch has failed to win a single match in this BBL and his team at the bottom of the table, on the other hand, Glenn Maxwell has led Melbourne Stars to 7 wins in the tournament and Stars holding the top spot at the table.

Today, in the absence of Aaron Finch, Daniel Christian captained Melbourne Renegades but result remained the same. During the match, Melbourne Stars fast bowler Lance Morris broke the bat of Melbourne Renegades batsman Shaun Marsh into two pieces. The incident happened in the last delivery of the 4th over. Marsh played a drive off the bowler’s full-length delivery but the contact was on the bottom of the bat. While the bat made a pleasing sound, the visual which followed wasn’t very pleasing for the batsman.

Renegades put a target of 169 runs to Stars with Shaun Marsh remaining their top-scorer with 63 runs. Stars didn’t have a great start but they find themselves in a comfortable position after Maxwell came to bat. Maxwell led Stars to victory with his unbeaten 83 off 45 balls. After this innings, Maxwell climbed to 2nd spot in leading run-scorers’ list in this Big Bash League with 311 runs in 8 innings. Marcus Stoinis is at the top spot in this list with 331 runs in 8 innings.