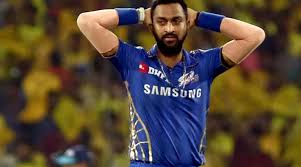 It was not a happy homecoming for Krunal Pandya after winning the Indian Premier League title with the Mumbai Indians. On arrival at the Chhatrapati Shivaji International Airport in Mumbai, the allrounder was detained by the Directorate of Revenue Intelligence (DRI) for carrying undisclosed possessions in gold, watches and other valuables.

DRI Had An Eye On Krunal Pandya
Ever since Krunal Pandya began to sport his high-end collection of watches and jewellery on social media, the Directorate of Revenue Intelligence (DRI) had kept an eye on him. This led to DRI’s suspicions and they made the move of questioning Pandya when he arrived in Mumbai from Dubai. Krunal Pandya will he further held and questioned by the Airport Customs officials. “As the case is small by DRI standards and a non-recurring type, it is being handed over to the Airport Customs by DRI, as per normal practice”, said the DRI source.

Krunal Pandya Was Part of IPL Triumph
Krunal Pandya was part of the Mumbai Indians squad that won their fifth IPL title just a couple of days back in the United Arab Emirates. Having convincingly dominated the finals, the Rohit Sharma-led team eased to victory without any major hiccups.

Krunal Pandya who is not part of the national team that is touring Australia had to return home. It was only on his arrival at the Mumbai Airport, that the unforeseen events took place. Caught!