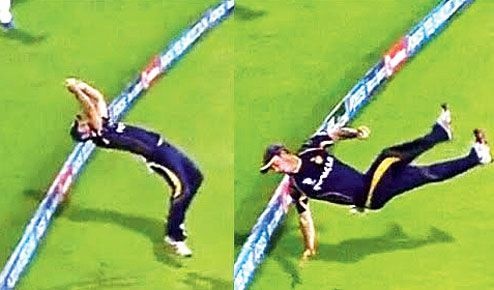 Chris Lynn is currently one of the most destructive batsmen around the world. Australian opening batsman is out the national side since 2018. However, Chris Lynn is performing really well in T20 leagues like IPL and BBL. Last year, the 29-year old was a part of T10 league and captained Brisbane Heat in Big Bash League 2019-20 season.

Chris Lynn made his IPL debut in 2012 playing for Deccan Chargers. However, he played just one match and didn’t find any buyer in the next season. In 2014, KKR put their bid on Lynn and it turned out to be a great decision in future. Before becoming a batting sensation in IPL, Chris Lynn got the recognition for grabbing a game-changing catch in IPL 2014.

It was the 11th match of 2014 edition between KKR and RCB at Sharjah, UAE. After winning the toss, Virat Kohli invited Gautam Gambhir-led KKR to bat first. Chris Lynn shined with the bat as he scored 45 runs off 31 balls. Jacques Kallis’s 43 also helped KKR to reach 150.

RCB made a good effort during the chase. They needed 9 runs off the last over. AB de Villiers and Albie Morkel were on the crease and Vinay Kumar was the bowler. Vinay Kumar conceded just 3 runs in first 3 balls. Now 6 runs were required off the last 3 deliveries. They were just one hit away.

AB de Villiers went for a big hit at deep mid-wicket. It was a chance of a catch for Chris Lynn. Initially, he misjudged the ball and went off balance. But Lynn was able to jump at the right time and he grabbed the ball when it had almost crossed the boundary rope. Chis Lynn landed a foot away from the boundary line. The effort Lynn turned a six into a spectacular catch. RCB could score 3 runs off the last balls and lost the game by 2 runs.