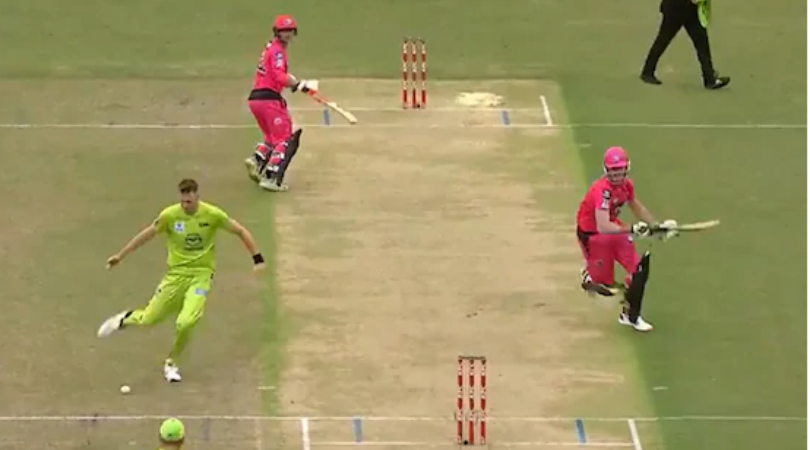 Chris Morris Footwork Helped The Team To Seal Brilliant Run Out In BBL Match: In the cricket, batsmen are often praised to play shots using their brilliant footwork. However, this time Chris Morris stole the show during the Big Bash League (BBL) match between the Sydney Sixers and Sydney Thunders with his elite footwork while bowling. Actually, Morris has used his football skills to dismiss the Sydney Sixers’ batsman.

It all happened in the 42nd match of the ongoing ninth edition of the Big Bash League when Sydney Sixers bowler Chris Morris came to bowl the first over of the innings. Meanwhile, Daniel Hughes faced the fifth ball of the over and batsman failed to middle the ball. The pair tried to sneak a single but Morris brilliantly guided the ball on to the stumps catching the batsmen short of the crease.

The official twitter handle of the Big Bash League has shared the video of the incident. They have uploaded the video with the caption written, “Goodness gracious.. Elite footwork from Chris Morris. Not ideal running from Dan Hughes and Josh Philippe… #BBL09. Here we are attaching the video of the same at the below of this article.

Earlier in the match, after winning the match Sydney Thunder opted to bowl first at Sydney Showground Stadium in Sydney. Meanwhile, due to the rain, the game was reduced to 16 overs each side. In the first innings, Sydney Sixers could manage to score only 76 before getting all out in the last over of the innings. From Sydney Sixers, Justin Avendano was the top scorer who played a knock of 28 in 31 balls.

In the reply, Sydney Thunders scored 28-2 at the end of the 5.3 overs before the rain came for again. Thereafter the match was called off by the official of the match. And hence Sydney Thunders won the match by just 4 runs with the Duckworth Lewis Method (DLS). Chris Morris awarded with “Player of the Match’ for his 2 wickets in his spell of 4 overs.