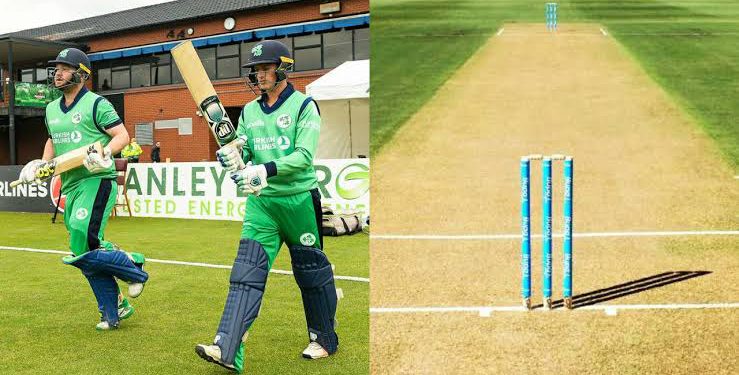 Following their strong shows against India and New Zealand, the Irishmen are now going to play a five-match-long T20I series against Afghanistan. Each of the first 3 games will be played at Civil Service Cricket Club situated in Belfast and the pitch report for the ground and Ireland’s head-to-head T20I record against the afghans can be found by the readers down below.

The average first innings score of 123 tells that the pitch is not good from a batsman’s perspective. However, in Ireland’s recent T20I series against the Black Caps, the first inning score was 170+ on all three occasions.

The pitch offers early assistance to the pace bowlers and there’s also some extra bounce available. Regardless, batting should be a nice experience at least in the first innings.

The pitch deteriorates a little as the game goes on and spinners come into play in the 2nd half of the game.

13 of the 21 T20 internationals have been pouched batting second at the Belfast Civil Service Cricket Club but keeping pitch reports of IRE vs NZ games in mind, the side who calls the toss right should bat first.

The Afghans have a clear edge over Ireland & have won 14 out of the 18 T20Is they’ve played against them. Moreover, the recent records are further skewed as Ireland has managed only 1 win in their last 13 matches with Afghanistan.

However, the upcoming series should see Ireland fare much better against the spin-heavy Asians. The Irishmen now have Harry Tector and Curtis Campher to provide able batting support to skipper Balbirnie and Paul Stirling.