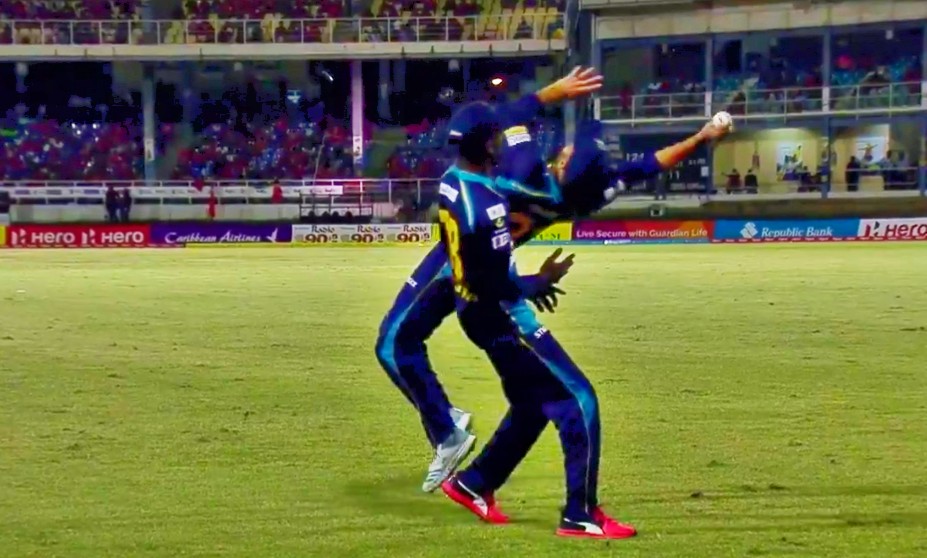 CPL 2019 season is very near to the end. Now only 6 matches are left in the league including 2 league matches and 4 playoffs match to decide the champion. However, 4 teams have already qualified for the play-offs. Shoaib Malik led Guyana Amazon Warriors has won all the 8 matches will finish the table at the top. Guyana, Barbados, St Kitts and Shah Rukh Khan’s Trinbago Knight Riders will play the playoffs.

The fielding in the tournament has been outstanding. We have seen some of the best catches in CPL 2019. Yesterday, in the match between Barbados Tridents and Trinbago Knight Riders we witness another spectacular catch. TKR’s Mark Deyal struck a lofted shot over long-on. JP Duminy and Jonathan Carter were running towards the ball without noticing each other.

Duminy misjudged the catch and overran it, but got a hand on the ball. However, he couldn’t hold the ball. But luckily Jonathan Carter was reached behind Duminy and he managed to take the catch with his presence of mind. Both fielders had almost against each other while attempting.

What a catch! This Duminy – Carter combo earns the play of the day from match 28 of CPL 2019 #CPL19 #Biggestpartyinsport #CricketPlayedLouder pic.twitter.com/xRGW76HMlg

This is not the first time Jonathan carter has showcased his outstanding fielding skills in CPL 2019. Previously, in a match against  St. Lucia Zouks, Carter had pulled off a stunner. Darren Sammy guided the ball at the cover region and ball went high in the air. Jonathan Carter made an effort like a superman and plucked the catch.

Sammy couldn’t believe his eyes after seeing the effort of Barbados fielder. This has to be the best catch of the season. The official Twitter account of the CPL shared the video of the catch with the caption reading, “Take a bow, Jonathan Carter! What a catch! Check out the play of the day from match 17.”

Take a bow Jonathan Carter! What a catch! Check out the play of the day from match 17 #CPL19 #Biggestpartyinsport pic.twitter.com/z5zLJP1fvl