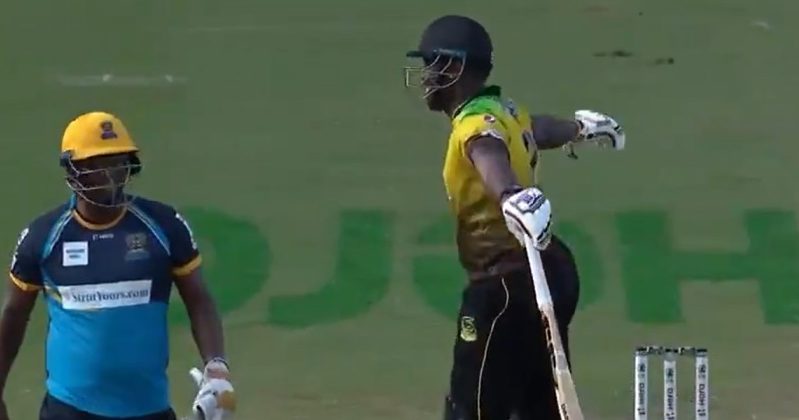 The league stage of CPL 2020 is almost over as Sunday will be the last day where four teams will be battling before the tournament enters its knock out stage. Trinbago Knight Riders, St Lucia Zouks, Guyana Amazon Warriors and Jamaica Tallawahs have sealed their spot in the semi-finals berth. The Knight Riders have had a perfect season so far with no defeat to their name.

On 5th of September, Barbados Tridents faced Jamaica Tallawahs for a match that witnessed quite a fun incident that involved Andre Russell and Rashid Khan. Andre Russell started this season of CPL very indifferently as he played knocks where he scored less than a run-a-ball. This was obviously surprising for the fans, however it changed as the tournament progressed.

A lucky escape for Andre Russell

In the game against Barbados Tridents, Russell was in his element as he scored 54 off just 28 balls with the help of four fours and five sixes. The innings would not have been possible for the swashbuckling batsman, if it was not for a lucky escape. Russell was almost cleaned up by Rashid Khan during his innings.

The incident took place in the 18th over of the Tallawahs’ innings when the batsman was on 41. Russell went for a big shot but was outwitted by Rashid’s googly as the ball went on to kiss the stumps. To Russell’s delight, the bails didn’t come off and he survived after a lucky escape. After the escape, Russell tried to mimic how Rashid celebrates, spreading his arms. On seeing that, Rashid tried to kick the Jamaican batsman hilariously.

The knock by Russell went in vain as the result was in the favour of the Tridents. Tallawahs had already sealed their spot in the semi-finals, while the Tridents were knocked out so the match was inconsequential. The only good thing for the Tridents was that they ended their campaign on a high.