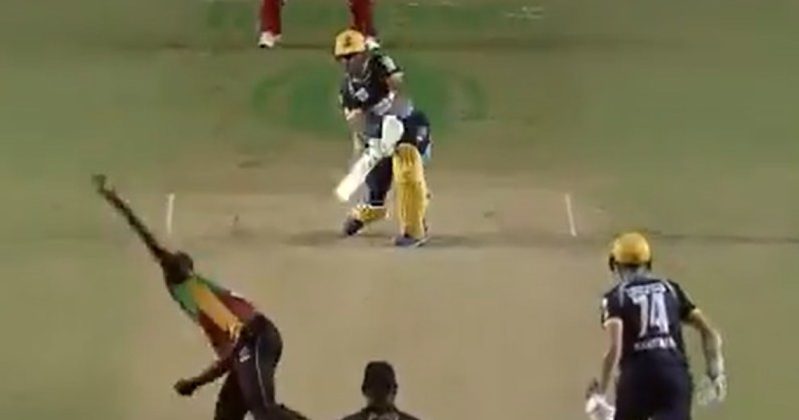 Not all cricket shots are out of the text book, and we’d agree with it after the effortless shot from Rashid Khan that saw the ball sail through for a six. As easy as it looked, Rashid Khan calmly lifted the first delivery he faced for a huge six. That was some composure from the young Afghan.

Rashid’s Shot Leaves Twitterati In A Frenzy
The shot from Rashid Khan was a sheer beauty, not just for the maximum it fetched his side but for the calm and composed stance he presented in playing it. The shot left fans in a frenzy and in an instance took to Twitter in expressing their excitement.

Playing for the Barbados Tridents, Khan came in to bat in the 15th over, with the score at 116/8 and was facing pacer Alzarri Joseph. Joseph charged in and bowled a full length delivery, Khan all poised, calmly hoisted it over the square leg boundary for a six. As insane as it looked while in motion, the shot became an instant hit. Some fans coined it as the ‘Half Helicopter Flick’, while one termed it as the ‘Heli’.

BTW this is the first ball he faced :D… Right into it :claps:

Just a heli that one.

I think he wanna dedicate that shot to msd😜

Rashid Stars in Trident’s Win
Rashid Khan’s heroics with both bat and ball played a crucial role in the Tridents registering their first win of this seasons Caribbean Premier League (CPL). Apart from the beauty of a shot he played to get off the mark, he went on to score a quick-fire 26 off 20 (with a six and couple of boundaries). With the ball he accounted for two crucial wickets in the middle order, adding to his earlier scalp of the dangerous Ewin Lewis (through a run out). A perfect all-round contribution from the Afghan.

Well, having said much, the classy shot he played to get off the mark is definitely going to be the highlight of this season’s Caribbean Premier League. And for the entertainer in Rashid Khan, we are sure to witness much more of it in the games to follow.