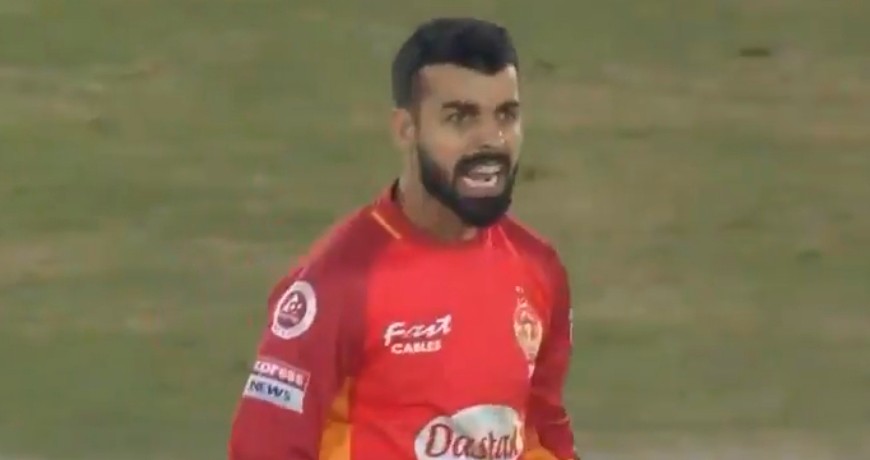 The 5th season of Pakistan Super League is halfway through. So far, the season has not been that great for Islamabad United, the team led by cricketer Shadab Khan. After the first 6 matches, the team could win 2 matches, got defeat in 3 and 1 was washed by rain.

During the 11th match of the season between Karachi and Islamabad, Shadab Khan blustered Rizwan Hussain for his throw but later left surprised finding out it was a bullseye at the non-striker’s end.  The incident happened during the 15th over of Karachi’s innings. Karachi batsman Iftikhar Ahmed played one of Shadab’s deliveries towards point and called Chadwick Walton for a single.

Rizwan Hussain the fielder at the point was quick to collect the ball and made an attempt of a direct hit at non-striker’s rather than giving the throw to the keeper. But the skipper Khan got angry at Hussain for not giving the throw at striker’s end. Shadab had thought that the throw would not hit the stumps but it did. Hilariously, Pakistan cricketer Shadab Khan kept shouting at the fielder as he was not aware that Rizwan Hussain was run-out at the non-striker’s end. Below is the video of the incident.

United had given a target of 184 runs to Imad Wasim-led Karachi Kings. Luke Ronchi and skipper Shadab Khan were the top-scorers for Islamabad with 85 and 54 respectively. Karachi had a bad start during the chase as skipper Babar Azam went for a duck. Despite the early wicket, Sharjeel Khan and Alex Hales gave a quick start to the Kings. The cameos of Delport, Imad Wasim and Walton at the end helped them to chase the target with 8 balls to spare.

Here Is The Video Of Run-Out:

Shadab Khan scolding Rizwan that he should have had thrown the ball at keeper end then realized its bulls eye on bowler's end 😂 pic.twitter.com/7k6X6aB0vi