Umran Malik bowls a 154 KMPH thunderbolt to Ruturaj Gaikwad who manages to collect a boundary off the ball. 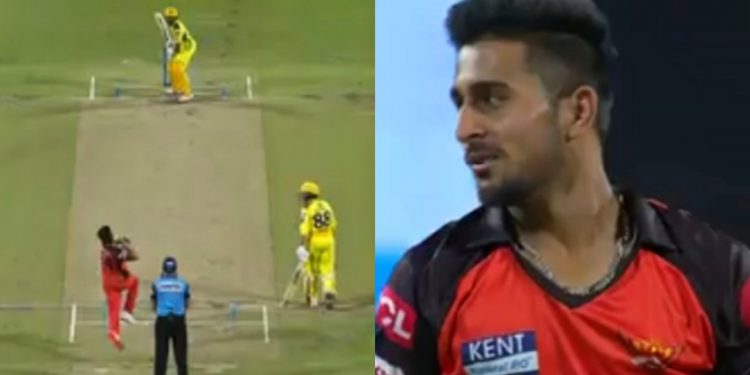 Sunrisers Hyderabad’s Umran Malik is no stranger to going places where no fast-bowler has gone before. With his lightning-fast speed, Umran has accumulated quite a few frequent-flier miles, and that shows from his multiple appearances on this year’s fastest deliveries of the season list.

In fact, in each of the 9 matches Umran has featured for SRH so far, he has walked away with fastest delivery of the match award, which is no mean feat.

But during Sunday’s evening clash between Hyderabad and the Chennai Super Kings, Umran went one step further. Well- technically, a little more than one step- as he managed to break Lockie Ferguson’s record of bowling the fastest delivery of the season.

Bowling the 10th over of Chennai’s innings against the well-settled Ruturaj Gaikwad, Umran clocked up 154 kmph on the speed gun! It was just marginally more than Gujarat’s Lockie Ferguson, who managed to dish out a 153.9 kmph thunderbolt in one of the matches.

But what was unfortunate for Umran and his super-fast delivery was that Ruturaj Gaikwad actually managed to collect a four of that ball. Granted, it wasn’t a shot that he quite intended to play, trying to loft the ball over covers. But as it turned out, the extra pace from Umran’s delivery managed to produce a lucky top edge that sailed for a four over third-man. Here’s the video of the delivery:

Despite the unlucky result, Umran has made it clear that there’s only going to be one gear to his bowling. He will need to work on a few variations as time goes by, which is where he’ll have the wonderful tutelage of Dale Steyn to hone his skills. But for the time being, Umran sets dead-set on clocking the elusive 155 mark on the speed  gun.

Talking about the match, it was a special one for the Super Kings, as captain MS Dhoni resumed his leadership duties once again. Ruturaj and Devon Conway stitched a 182-run partnership to power the men-in-yellow to a 202/2 at the end of 20 overs. Hyderabad, in response, did have the likes of Nicholas Pooran (64 off 33) and Kane Williamson (47 off 37) make some useful contributions, but they ultimately fell short by 13 runs.