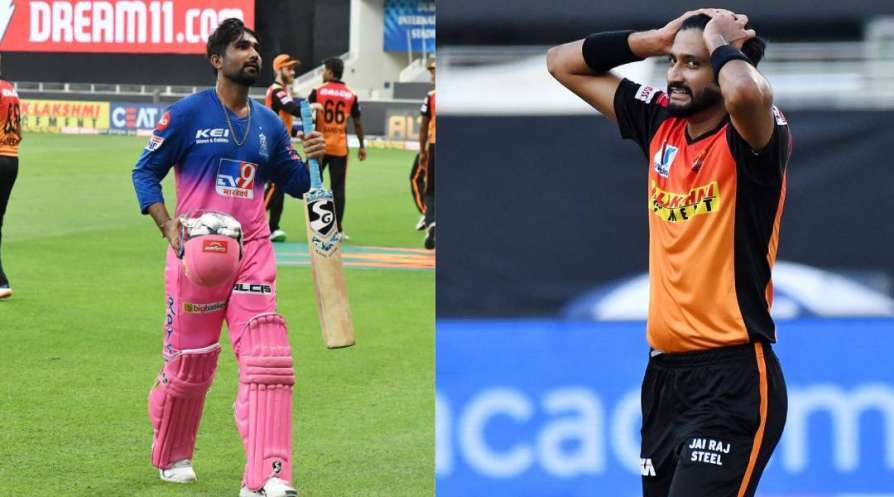 In a high-pressure encounter between the Sunrisers Hyderabad and the Rajasthan Royals, the onfield action just got out of control. In what could be seen as an onfield altercation between two players from both teams. But before things could get ugly, Sunrisers skipper David Warner stepped in and resolved the tiff between Sunrisers pacer Khaleel Ahmed and Royals batsman Rahul Tewatia.

What Happened Rahul Tewatia and Khaleel Ahmed?
As  it often happens out in the middle, things were heating up towards the end of the Rajasthan Royals innings. Allrounder Rahul Tewatia in the company of Riyan Parag had managed to steady the run chase and drive the team to a winning position. During their innings, the two batsmen had smashed the Sunrisers bowlers to all corners of the park; this perhaps had frustrated the Sunrisers bowlers who were unable to dismiss the duo since they came together at 79/5.

The onfield exchange was witnessed in the last over of the Royals runchase when the bowler Khaleel Ahmed and Tewatia were continuosly seen in a verbal exchange. Things got off the hook after the match had ended when Tewatia and Ahmed came face-to-face and continued with their verbal exchange. It was only when David Warner intervened and set the duo aside.

The Tiff Ends In Good Spirit
In all good spirit, after the game Khaleel Ahmed was seen in a good mood, talking to Tewatia with his arm around the Royals’ batsman shoulder. Both were seemed to have gotten over the heated exchange which clearly got to them during the pressure situation that the game brought out of the players.

Royals Pull Off Stiff Run Chase
For once again, the Rajasthan Royals had turned a match in their favor out of no where. Once again, the hero being Rahul Tewatia! Yes, the left-hander, along with Riyan Parag was involved in an unbroken stand that saw their team through.

The match seemed almost out of the Royals hands when they had lost half their side and the required rate soaring to over a run-a-ball. But the Royals batsmen kept their cool and saw their team home amidst the unwanted heated exchange between players that was getting out of hand.