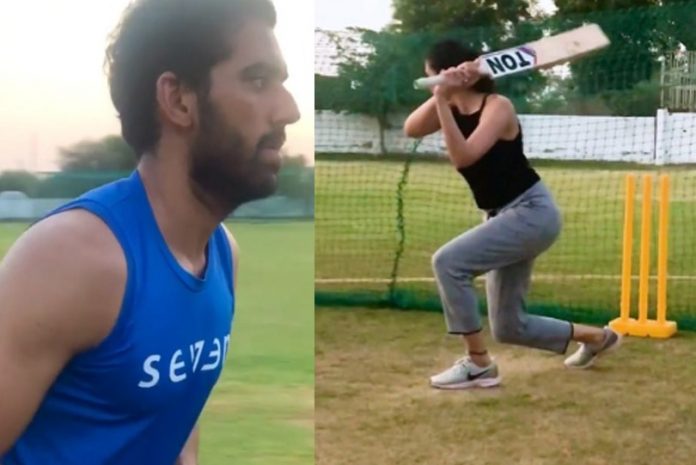 Ever since the lockdown was declared in India, daily routines have been thrown off their normalcy. Cricketers too have been limited to their own backyards or a makeshift practice space. However, there was some respite for athletes when the government lifted few restrictions prior to declaring the fifth phase of lockdown. Sports facilities were allowed to let players engage in practice sessions albeit maintaining the required social distancing and other precautions. And Chennai Super Kings (CSK) pacer Deepak Chahar is one who seems to have made the most of the relief.

Chahar took to the nets at his father’s cricket academy (the Goenka Chahar Cricket Academy) in Agra. Under the watchful eyes of his father, Chahar was seeing sending down some pacy deliveries; ensuring he maintained his line and rhythm. On Wednesday, Chahar’s sister Malti decided to join him at the session…rather for a fun session! The brother-sister duo quickly got down to business, Malti took her guard at batting and Deepak headed to his bowling mark. All set…Chahar took his stance…charged in through his run up and just at the time of delivery pulled out off his usual bowling action and bowled an under-arm delivery which Malti edged to the slips.

As hilarious as it all looked, Malti posted the video on her Instagram account with a few humorous emojis, and captioned it – We miss IPL. Well, that’s some association to the Indian Premier League in which Chahar plays for the Chennai Super Kings and has been have a sensational run in the last two editions. A string of good performances that even earned him a call to the national team; having played a handful of matches across the shorter formats of the game. Although an injury got the better of him, Chahar is destined to play for the national team in the near future.

So that was some mix of fun with work for the Chahars and definitely some much needed relief from being restricted to the indoors.