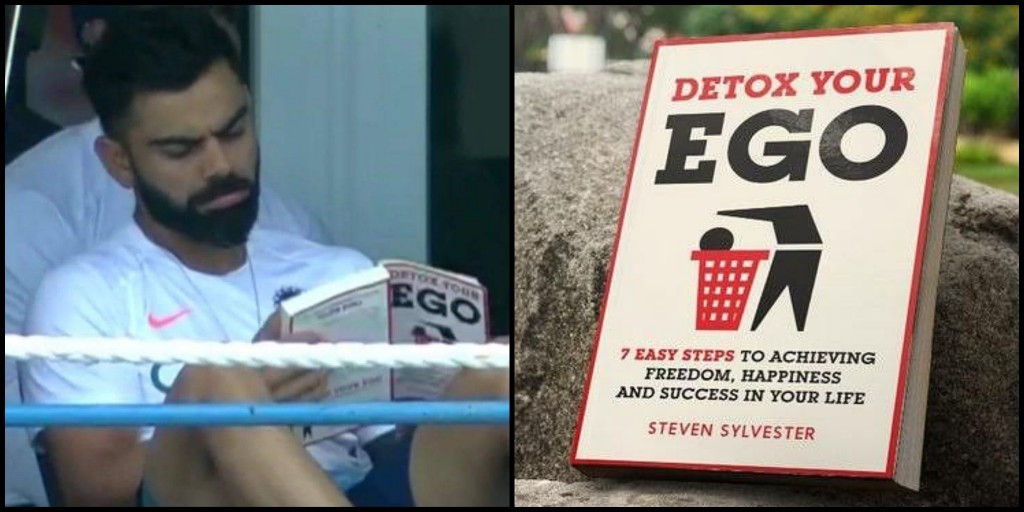 Being the Indian cricket team captain is not an easy job. Captain gets praise when the team performs well but also gets a lot of criticism when the team underperforms. Same thing happening with Virat Kohli after India’s horrible loss in World Cup semi-final. After, world cup, rumours about a rift in team India especially between Virat and vice-captain Rohit Sharma are spreading. Meanwhile, the Indian skipper was spotted reading a book named ‘Detox Your Ego’ in the dressing room during the first test against West Indies. After which fans on interweb trolled 30-year old.

The book ‘Detox Your Ego’ by Stephen Sylvester is about getting rid of ego and achieving freedom, happiness and success in life. During India’s innings when the camera panned to the dressing room, Virat Kohli was reading this book. Virat reading a book about getting rid of ego was obviously enough to start a debate. Fans on social media reacted to it as the pictures went viral. Here below are some of the reactions of fans.

Looks like someone gifted him the right book!#WIvIND @imVkohli pic.twitter.com/cItklD3kqd

Just trying to think of who would have convinced Virat Kohli to read that "Detox your Ego" book. #WIvIND #INDvWI

ALSO READ: The Man Who Was Better Than Sachin Tendulkar, Today Lives In A Slum

Meanwhile, Virat Kohli also faced criticism for not picking Rohit Sharma in the first test. Also, his idea of picking Ravindra Jadeja ahead of R Ashwin was disliked by experts. However, Jadeja has performed really well so far in this test. The partnership of Jadeja with Ishant Sharma helped India reaching 297 in first innings. Jadeja scored 58 while Rahane was the top scorer with 81 runs.

After day 2, West Indies are on 189 at the loss of 8 wickets out of which Ishant Sharma gets 5. West Indies is currently trailing by 108 runs. This is India’s first test in ICC World Test championship. Each team will play a series against 6 different teams as the part of this championship. In the end, top 2 teams will play the final at Lord’s cricket ground in 2021.