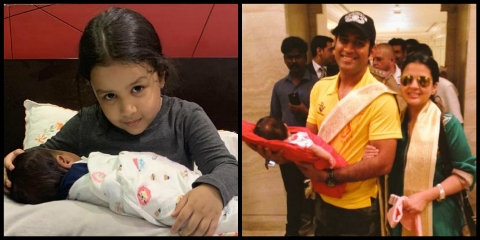 Netizens feel MS Dhoni blessed with a second child after pictures shared by the cricketer’s wife went viral. Sakshi Dhoni posted two pictures on her Instagram handle, in which daughter Ziva can be seen holding an infant. The caption of the post is a ‘heart emoji’ which is not enough to clarify things. Ziva Dhoni’s Instagram account has also uploaded the same pictures.

The post soon filled with tizzy fans’ comments. Some believe Sakshi and Dhoni have become parents of a son. Few fans even made a query but didn’t get a reply from Sakshi Dhoni. While some users commented that the infant is Hardik Pandya’s son and not the second child of Dhoni. Hardik and his wife Natasa were blessed with a son on July 30.

However, it’s not possible as Hardik is in Baroda while Dhoni is living in his Ranchi house. It’s not easy to visit along with an infant at the time of the pandemic. Pandya brothers had visited the place of Dhoni on the occasion of his birthday but that was before the birth of Hardik’s son. So it’s not confirmed that Dhoni has become a father of the second child or not.

CSK Captain Sets To Gear Up For IPL 2020

MS Dhoni is currently gearing up for the upcoming IPL season in UAE. The 39-year old recently trained in the indoor academy in Ranchi. As the tournament nearing the CSK captain set to join rest of team players. According to ESPNcricinfo’s report, the franchise wants to hold the camp from August 16 to 20 post which all the players will fly to UAE for the IPL.

The 15-member CSK camp will take place in Chepauk stadium. Chennai franchise management is seeking the Tamilnadu government’s permission. The proposal for the same has already been given however, written approval is awaited.

MS Dhoni may join the camp on the 16th of August. Remind you, the former Indian skipper has not played any match since July 2019. Dhoni was last seen in CSK training camp in February and March before the postponement of the league.