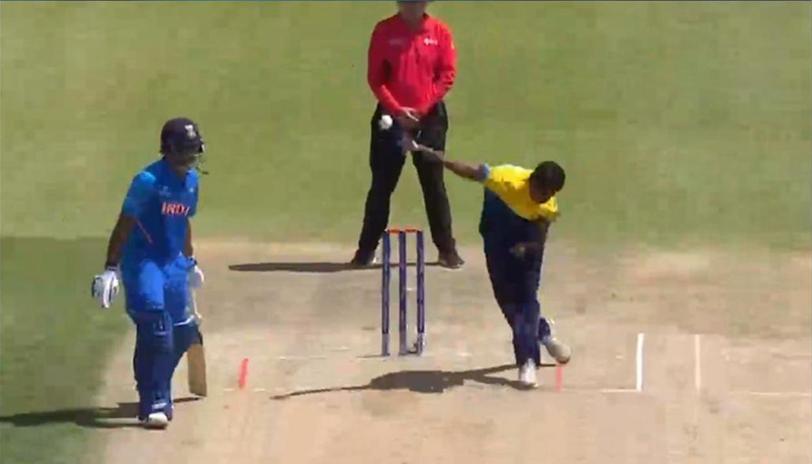 Yesterday, India under-19 team started the U19 Cricket World Cup 2020 with a 90-run win over Sri Lanka. Priyam Garg-led team set 298 runs target for the Sri Lankan side. However, despite having a good start in the innings Sri Lanka lost the match as their lower order collapsed and team all-out on 207 runs.

Matheesha Pathirana who has become an internet sensation due to his bowling action is also the part of Sri Lanka u19 squad. His bowling action is very similar to the legendary Sri Lanka pacer Lasith Malinga. Pathirana hogged the limelight when he picked up 6 wickets for just seven runs while making his debut for Trinity College Kandy last September.

Meanwhile, Matheesha Pathirana has grabbed eyeballs once again after one of his delivery clocked 175 KMPH during yesterday’s match against India. Yes, you read that right. He bowled the 4th over of India’s innings and he lost the line when bowling the final ball of the over. It was given a wide but, the speedometer shocked everyone as it showed that the ball was 175 KMPH which is hard to believe.

ICC has not given any update on the delivery but the delivery doesn’t seem to be more than 140 KMPH. This is definitely a fault of the speedometer. One such incident had happened before as well when speedometer has recorded Pakistani pacer Mohammad Sami’s ball as 164 KMPH. However, officials later found out that there was a fault in the speedometer.

Currently, Shoaib Akhtar is holding the record of the fastest ball ever recorded in cricket history which was 161.3 KMPH against England at Newlands in 2003. No bowler has been able to break Pakistani speedster’s record. Although, Shaun Tait and Brett Lee are the other two who have clocked 161 KMPH. But the speed of their deliveries was less than Akhtar’s delivery. Shaun Tait had bowled a 161.1 KMPH in 2010 vs England in Lord’s, Brett Lee had also bowled a 161.1 KMPH against New Zealand at Napier in 2005.