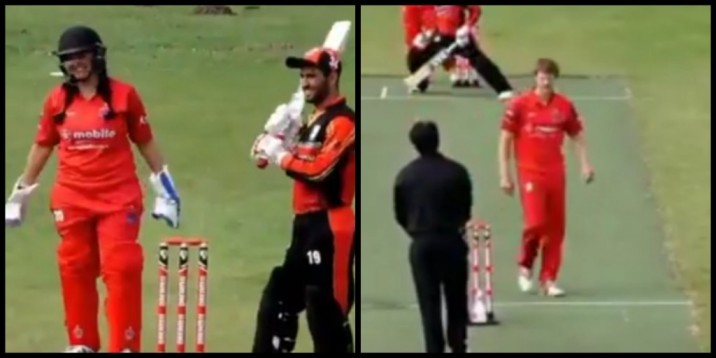 Recently, the final day of the Kummerfeld leg of the European Cricket Series (ECS) T10 witnessed a rare incident. There were four matches in the tournament which also included the semi-finals and the final that to be played on Friday whereas the first semi-final happened between the PSV Hann Munden and KSV Cricket.

However, the KSV Cricket won the match by five wickets but another incident that took the limelight was Sharanya Sadarangani who has already played in the ECS T10 League and became the first woman player to do so. Now, she has kept wickets as well for Finn Sadarangani who is also her husband and the scene wasn’t usual.

Finn also bowled an over in the match and was taken away for 16 runs as well. However, this was the second time that she did the keeping for Finn during the game against SC Europa Cricket where Finn gave away just nine runs in his two overs and claimed a wicket as well.

Meanwhile, KSV Cricket defeated PSV Hann Munden in the first semi-final. After choosing to bowl first, the KSV bowlers did quite well and restricted their opposition to just 88 runs as they have bundled their opponents when two balls remaining in the innings. Izatullah Dawlatzai, Sultan Sherzad Shah and Mussaddiq Ahmad took three wickets each also.

Sharanya Sadarangani did well with the keeping-gloves and took two catches and also did a run-out. While chasing the target, Shoaib Azam Khan and Mussaddiq started off well scoring 36 runs in only 14 deliveries. However, the momentum helped KSV Cricket chased down the target with five wickets and 11 balls to spare. Finn Sadarangani also played a key role in the chase where he scored 6 runs off 7 deliveries also.

Currently, the world has been slowing coming back into the zone. While England will take on West Indies soon in the longer format, they will take on Pakistan after that as well.