Shikhar Dhawan will be leading the Indian side in the 3-match ODI series against South Africa. 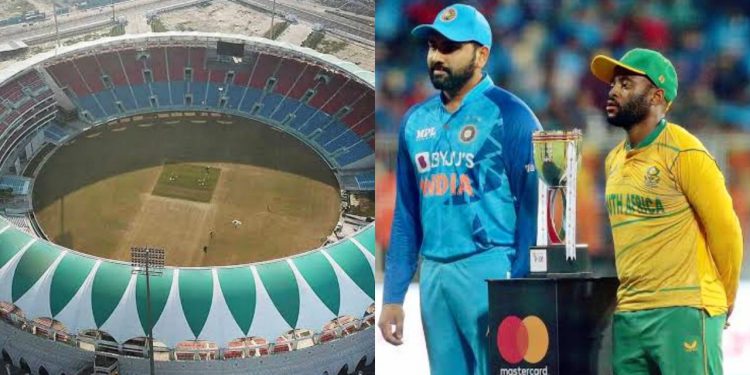 Right after the conclusion of the T20 series, India and South Africa are set to face each other in a 3-match ODI series. The series will kick off with the first ODI in Lucknow after which the next two games will be played in Ranchi and Delhi respectively. Here, we will be discussing the ODI records of the Ekana Cricket Stadium Lucknow and the Pitch Report of the venue for the 1st IND vs SA ODI.

The BCCI has rested the entire 15-member T20 World Cup squad for the ODIs against South Africa. However, 3 of the standby players – Shreyas Iyer, Deepak Chahar, and Ravi Bishnoi have been named in the squad for this particular series. Shikhar Dhawan has been appointed as the captain and Shreyar Iyer will be acting as his deputy.

On the other hand, the South African side does not have many changes from the T20 squad. Janneman Malan and Adile Phelukwayo are the only two inclusions on the side.

The pitch at the Ekana Cricket Stadium is of neutral nature. There is assistance for both, the batters as well as the bowlers here. The pacers tend to receive movement off the surface in the initial stages after which it becomes a tad bit easier for the batsmen. The pitch also has a slower side to it which would trouble the batters as the match progresses. The spinners might go on to exploit the conditions and create great trouble for the batters here.

As the records suggest, it has been tough to defend totals at the Ekana Cricket Stadium, hence, choosing to bowl first after winning the toss would be the better option here at Lucknow.

Lucknow Weather Forecast for the IND vs SA 1st ODI

There is a forecast of thunderstorms throughout the day on Thursday. With a 100% chance of rain predicted, it is highly likely that the rain will play spoilsport.