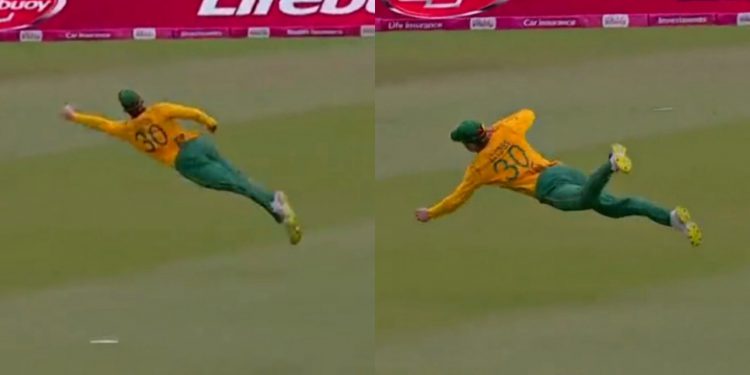 Team South Africa is currently touring England where they have finished all the matches in the shorter formats and will lock horns with the English players in a 3-match Test series now. While the ODI series ended in a draw, South Africa trumped England in the third T20I to win the series by a margin of 2-1. The highlight of the third ENG vs SA was a spectacular catch as Tristan Stubbs goes airborne to dismiss Moeen Ali.

The third ENG vs SA T20I was played in Southampton where the English captain Jos Buttler opted to bowl first after winning the toss. The Proteas batters scored 191 runs in their allotted 20 overs with half-centuries from Reeza Hendricks and Aiden Markram. However, the exhilarating moment in the match came in the second inning as Tristan Stubbs goes airborne to complete a one-handed stunner.

The extraordinary effort in the field came in the 10th over of the England inning when they were struggling after losing 3 important wickets at only 59. Markram was brought into the attack by the captain and delivered for his captain in his first over. The last delivery of the over was a flatter one by the bowler and Moeen Ali got a leading edge which went up in the air.

One of the best catches you'll ever see 👏

Though the ball was quite far from the fielder, Tristan Stubbs goes airborne to complete a sensational one-handed catch which left them very stunned. The brilliant effort by Stubbs ended a rather short inning of Ali as England’s boat sank further. South Africa eventually won the match by a whopping 90 runs and with the victory, also won the series.

Apart from the brilliant effort by Stubbs, Tabrez Shamsi turned out to be a matchwinner for the Proteas team as he picked up a fifer in his 4 overs. Both the teams will now engage in a 3-match Test series which will commence on 17th August at Lord’s London.