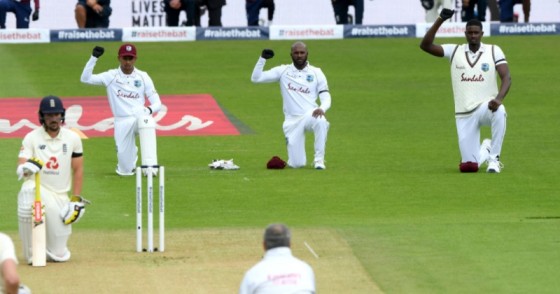 International cricket is finally making its way back as West Indies is touring England for the 3 match Test series. Sporting events across the world had come to a halt after the outbreak of Coronavirus pandemic. However, different cricket boards have now decided to get things going and are gradually taking steps to resume cricket matches.

On the first day of the first Test match between England and West Indies, all the players took a knee together for 30 seconds in Southampton. The gesture was displayed in a show of solidarity for the Black Lives Matter movement. England and Wales Cricket Board which have come under fire for unequal policy, decided that players will sport their solidarity by taking a knee ahead of the first Test.

Yesterday England’s stand-in captain had hinted about the “gesture”, however he was not so specific about the details of the same. “There is going to be a gesture shown from us as a team in support of Black Lives Matter towards equality in society throughout cricket and throughout the sport. We aren’t in any way, shape or form showing support towards any political matters on the movement. We are all about equality through society and sport,” Stokes said on match eve, reported Cricbuzz.

The gesture has been made before since Premier League matches started last month and now it will be the same for the cricket matches as well. Members of both teams will also display the BLM logo on their shirt collars, which was designed by Watford footballer Troy Deeney’s partner Alisha Hosannah.

Wisden Trophy has been named as ‘Raise the Bat series’ to welcome back Test cricket which was interrupted by the Coronavirus pandemic. Meanwhile, to honour the key workers and corona warriors, England players have decided to sport the names of people who have made a big difference to the fight during the COVID-19.