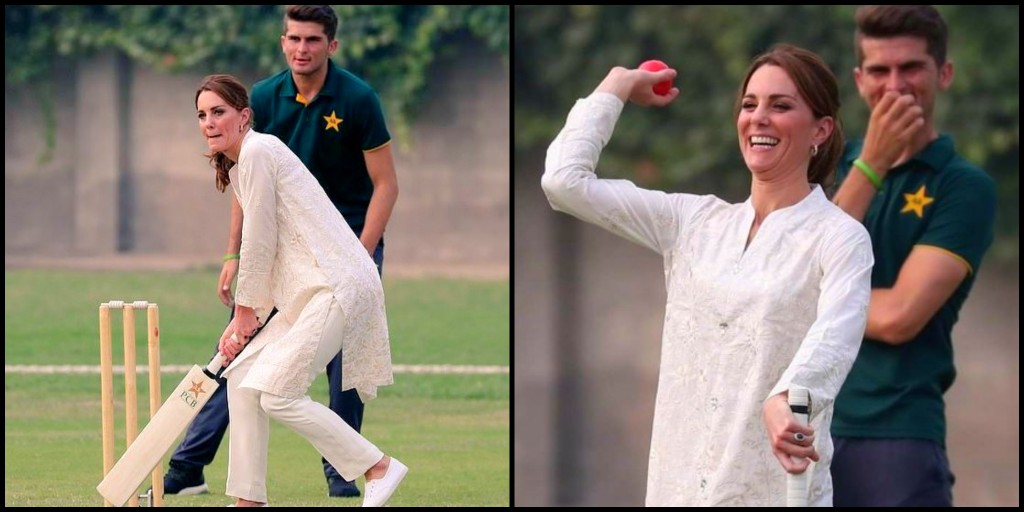 British Royal couple Prince William and his wife Kate Middleton are currently on their 5-day Pakistan tour. Both are visiting around the country in traditional Pakistani clothes. On 17th October, during the 4th day of their visit to the country the couple joined a group of children and Pakistan cricket team players for a friendly cricket match at the National Cricket Academy, Lahore.

They played this match with underprivileged children between the age of 10-14. The couple was hosted by PCB and Pakistan team’s Azhar Ali, Hasan Ali, Shaheen Afridi and women’s team’s Sana Mir were also present in the Academy.

Duchess of Cambridge, Kate Middleton stole the show with her batting skills. Her happy smile while playing won netizens hearts. Though she was caught out twice. Prince William also showcased his batting skills. Several pictures and footage of the royal couple playing cricket went viral. Here below is a video.

After this match, Hasan Ali hailed the Royal couple’s gesture. He tweeted, “It was an honour to meet Prince William and Princess Kate Middleton in NCA today. Royalty runs through their blood but still so simple, humble & down to earth (sic),”

However, this is not the first time when Kate Middleton has shown her interest in cricket. In 2016, during her tour of India, she played cricket with children in Mumbai. She was welcomed by Sachin Tendulkar and Dilip Vengsarkar. The British royal family has always shown their love for cricket. Before, the start of the 2019 World Cup, Queen Elizabeth had invited all the teams to the Buckingham Palace.

WATCH: Kate Middleton plays Cricket with children at Mumbai’s Oval Maidan, gets a cheer up from Sachin Tendulkarhttps://t.co/MWWx1OlWZo