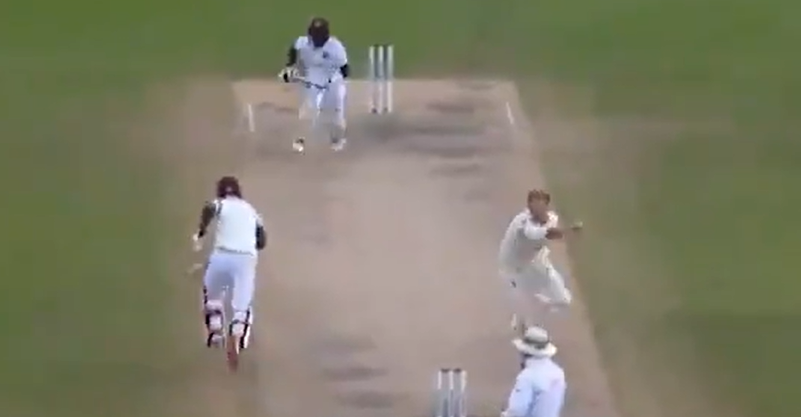 Ben Stokes has been a renowned name in cricket over the last few years. The Durham all-rounder has always been consistent with his performance, be it with the bat, ball or even while fielding. During the second test win over the West Indies at Old Trafford, Stokes did something unimaginable….definitely something not often witnessed on the cricket field. Stokes ran in to bowl, and chased the same delivery back to the boundary after his follow through.

Stokes’ Brilliance
Coming at the back of an already tired 6-over spell, Stokes was called over for another over. It was during the 42nd over of the West Indies 2nd innings, Stokes ran in to bowl, his delivery was punched back down the ground by batsman Jermaine Blackwood. In an instance, Stokes already in his follow through, turned back and chased the ball to the boundary line and in his attempt saved a certain boundary. The West Indies batsmen did run four runs, but Stokes’ effort sum up his sheer dedication and commitment to the game. That makes him the top all-rounder of modern day cricket.

All Round Ben Stokes Show
Over 250 runs and 3 wickets along with his fielding brilliance, Ben Stokes was the top of his game in the second test against the West Indies. In the first innings, he held the innings back along with D Sibley, after England had lost their captain at 81/3. Sibley’s 120 was outclassed by Stokes who went on to score 176 and help England cross the 400-run mark. With the ball, he picked the priced scalp of West Indies opener Kraigg Brathwaithe. When England needed some quick runs in the second innings, Stokes opened the innings and made a quick-fire 78, that forced the game into a result in favor of England. When he returned with the ball in the second innings, Stokes broke the century partnership that anchored the West Indies innings, and added two more wickets to his kitty. That’s some performance for the team in leveling the series back at 1-1.

Fans React
Cricket lovers were blown away with Stokes’ display on the field. Most even went on to call him the ‘Superman’ of cricket. His passion for the game was witnessed through his effort in saving that boundary, and how it boosts everyone else’s performance as well. Ben Stokes, that was epic!

#Benstokes the BEST all-rounder at present..🤩

Ben Stokes is the most valuable cricket player in the World at the moment.
Batting, bowling and fielding top notch in all three formats. @benstokes38 @MichaelVaughan @bhogleharsha #ENGvWI

175 in the first innings, 78 in the second innings, breaks a 100 run partnership, fielding on the boundary while he’s bowling. Ridiculous Ben Stokes performance again here

Ben stokes is mixture of modern ABD in batting, kallis in bowling, Rhodes in fielding and virat kohli in aggression.

Ben Stokes fielding on the boundary off his own bowling 🤣🤣