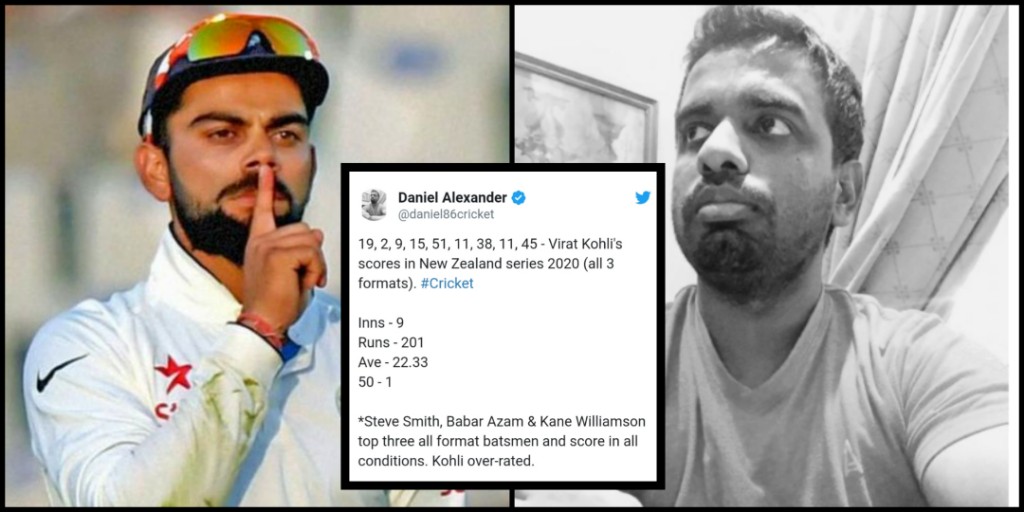 The world has not seen the best of Virat Kohli so far in 2020. The Indian skipper who is known as century machine has not scored a single century in 15 international innings this year. Meanwhile, seeing the poor run of form of the current no.1 test batsman, Sri Lankan journalist Daniel Alexander criticised the batsman but later he was shut down by English cricketer Alex Tudor.

Sri Lankan took to his Twitter account to call the Indian batsman overrated. Alexander showed the stats of Virat Kohli and feels he can’t bat at the unsuitable conditions. He wrote, “Steve Smith, Babar Azam & Kane Williamson top three all format batsmen and score in all conditions. Kohli over-rated,”

The statement of the journalist sounds absurd as Virat Kohli has dominated in every part of the world he has played before this tour. Meanwhile, English cricketer Alex Tudor who has played 10 Tests and 3 ODIs came up with a reply to Sri Lankan. Tudor replied, “Overrated? are you just looking for people to hit up your timeline? One bad tour & people coming for the great man”

Overrated 😏 are you just looking for people to hit up your timeline 🤷🏾‍♂️ one bad tour & people coming for the great man 👎🏿 https://t.co/xbUdXejnV1

Meanwhile, in the ongoing tour of New Zealand,  Virat Kohli failed to impress in 5-T20 matches series. The T20s were followed by the worst ODI series of Virat Kohli as captain. The skipper could score only 75 runs in 3 innings which are the least runs scored by Virat Kohli in an ODI series as captain. Virat Kohli’s failure with the bat led a 3-0 whitewashed.

After a bad limited-overs series, Virat Kohli once again failed to play a good knock in 1st test match. He could score only 21 runs in both innings. Mayank Agarwal was the most run-scorer for India in 1st test with a total of 92 runs in the match. The Indian team lost the match by 10 wickets. This is India’s first loss in 8 matches in ICC Test championship.

Meanwhile, Virat Kohli speaks up on his current form. He said, “I am absolutely fine and batting really well. I feel that sometimes scores don’t reflect the way you are batting and that’s what can happen when you don’t execute what you want to well,”