European Cricket League: Deesh Banneheka achieves a feat that is so rare to accomplish 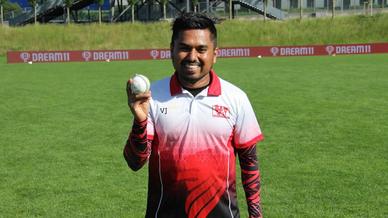 The game of cricket in the recent past has favoured the batsmen. With most of the rules & regulations backing the batsmen, it becomes very difficult for a bowler to adjust and perform well for his team. The inception of T20 leagues and recently T10 leagues have made things even tougher for the bowlers. However, in a match in the European Cricket League, Deesh Banneheka got the better of the opponent batsmen.

Dream11 European Cricket League is a T10 tournament involving seven teams competing for the title. Every game of the tournament is live streamed worldwide on the European Cricket Network. Since an inning of the match only lasts for 10 overs, more than one match can be played in a short span of time on a particular day.

Plying his trade for Winterthur, Sri Lankan cricketer Deesh Banneheka bowled brilliantly and ended up taking 5 wickets in an over. It is indeed an amazing feat as a bowler and not many bowlers have done it in the past especially in T10 league. The bowler did the unthinkable in the game against Olten. The opponent team was cruising at 75-1 in 7 overs before Banneheka wreaked havoc with the ball in the European Cricket League.

Banneheka claimed his first wicket on the very first ball of the eighth over followed by a dot. The bowler then took 4 wickets in succession which is also known as a double hat-trick. Even after a fantastic performance by Banneheka, his team ended up on the losing the game. If we talk about international cricket, Deepak Chahar has the best figures in T20Is.